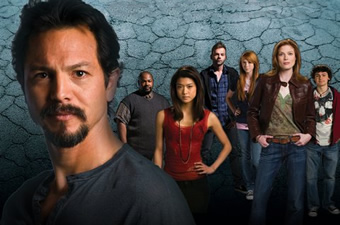 TV show description:
William Banks is recovering drug addict who lives in Los Angeles. When his daughter was born, he made a deal with God that he would give up drugs and devote his life to help other people to beat their own harmful additions.

Helping William in his quest are Akani Cuesta (Grace Park), a confident beauty with a hardened street edge, and Arnie Swenton (Esteban Powell), a procrastinator who has a habit of getting into trouble.

While William must often resort to unethical and sometimes illegal methods to help his clients come clean, his success has earned the respect of the LAPD and other officials. William frequently asks for guidance from God in his mission and to help maintain his own path.

With every success and failure, William wrestles with his commitment to his work and his love for his wife Melissa (Amy Price-Francis) and their children, Lula (Liliana Mumy) and Ben (Brett DelBuono). She’s left him twice before and the children haven’t forgotten his multiple stints behind bars.

The series is based on the life of co-executive producer Warren Boyd, a real-life “extreme interventionist” who has helped many famous people beat their addictions over the years.

Series Finale:
Episode 26 — Trick Candles
On the 10th anniversary of his becoming sober, William spends the day helping an old friend get clean — Henry (Richard Lewis) has been strung out on heroin and speed for years and it’s costing him his wife (Annabelle Gurwitch) and two children.

At the same time, William is trying to convince a mortgage company to lend him enough money to buy a house. He also needs his soon-to-be ex-wife to cosign the loan.

Though William doesn’t have any interest in celebrating his sobriety anniversary, Swenton, Akani, and Paulina Kmec (Whoopi Goldberg), his former sponsor, gather some of the addicts that he’s helped for a surprise party. Most are doing well but some have relapsed and some have even died.

Bring it back Amazon it helped quit drinking in real life it helped alot of people I know, but we got people activist non believer that control the tv series. They want people cleaned up or there no jobs or nonl police work they want people to stayed on drinking, drugs everything. We are in America we have become communist world we are control in we can do and not do. There no more freedom or opportunities, there’s nothing but leaving in a frightening world. How sad well it’s what it is.

OMG I LOVE this show! Its soooo good! You have to revive the show! It’s so real and the best show Ove ever seen when it comes to original season shows. I’ve seen almost everyone and this show is by far the BEST! WHY DOES ALL THE BEST SHOWS GET CANCELLED AND KEEP MAKING MORE SEASONS THAN 2 THIS SHOW SHOULD HAVE 10 OR MORE SEASONS AND JUST JEEP GO GOING! THIS IS AN EYE OPENER FOR SO MANY PEOPLE TO SEE WHAT ADDICTION IS ALL ABOUT, HOW LIFE TURNS ON A DANGEROUS AND DEADLY PATH OF DEPENDING TO HAVE… Read more »

This show is amazing! I was in rehab 6 years ago when I was first introduced to it and was required to watch a few episodes. I just found the full 2 seasons on Amazon prime video and bindge watched it all. No finding out there won’t be a season 3 is so disappointing. There is so many shows with drug abuse and crime, and this is one helping the addict…why air something like that???

Totally loved this show. Heart broken its over. Just now saw this show in 2019. Where have I been.

I did too barely I loved it too bad it went off great actors and actresses of all kinds of humans kids, adults, aunt’s uncles, older grandpas,grandma’s, dad’s mother’s sisters, brothers friends cousins and do sooooo on too bad it ended great showrey

I really enjoyed the acting on “The Cleaner”

This show inspired me to fight my addiction and get clean. Please bring it back! I know so many people that would also be inspired watching this!!! This show saves lives unlike the garbage that had replaced it

Just watched the last episode of The cleaner, I can’t believe you cancelled this show!!! This was the only show A&E has aired that was worth watching, they really blew it when they cancelled this one!!!

Please bring back the show the Cleaner!!! It was such a great show!

Why is this show off and now there is nothing butt crap on .. Duck Dynasty , Rodeo Girls I am ready to stop watching A & E altogether… you better get you s*** together or I am gone…

Please get rid of duck dynasty or another one of your dumb butt reality shows and bring back the cleaner it was a great show and an eye opener for society to show recovery does happen!!

Just writing in to say that I still miss the Cleaner, a couple of years later. It was one of the best, most intense shows on tv. William reminded me so much of my uncle, before he was murdered by his father-in-law. It felt like I lost him all over again. Man…did you miss the mark in my book.

To Whom It May Concern, Please know how much the cleaner helped many suffering addicts. Also it educated youngsters and myself NOT to play around with hard drugs. Also, it showed society that ANYONE could suffer from the vast effects of addiction. I really have missed this show and I can’t believed you canceled this yet they continue to have “JUNK” tv shows like the NJ Shore. I can’t believe some of the crap that continues to stay on the air? Regardless please re-consider another episode of “The Cleaner”! I sure miss my weekly show 🙁 Please reconsider airing new… Read more »

I am like the rest of the people on here, I never watch A&E excepted when I saw an advertisement for the Cleaner I loved it from the first time I saw it, I am so sad it is cancelled. It had some very heart wrenching and heart warming stories, and even better it included a touch of God in it. I miss this show I cannot believe it was cancelled, shame on you A&E. By the way I had not watched your station before the cleaner and I don’t watch it now, too much filth.