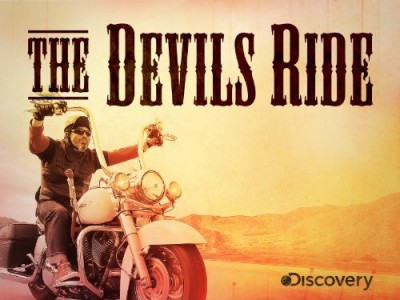 Tonight may be the season finale for The Devils Ride but it’s not the end for the Discovery TV series. The cable channel has just renewed the show for a second season.

Discovery hasn’t announced when season two will air or how many episodes have been ordered but the first season of The Devils Ride debuted last month with the first of a half dozen installments.

Discovery announced today renewal of its hit Tuesday night series – THE DEVILS RIDE for a second season. THE DEVILS RIDE goes inside the world of motorcycle clubs with the members of San Diego’s The Laffing Devils. Airing after DEADLIEST CATCH, THE DEVILS RIDE averaged over 2 million viewers each week. Produced for Discovery by Bischoff Hervey Entertainment with Eric Bischoff and Jason Hervey serving as Executive Producers, THE DEVILS RIDE wraps up with its season finale tonight at 10pm e/p as the club sees a final showdown between ex-president Gipsy and new club head Billy the Kid.

All season long trouble as been brewing within the club’s ranks as members were forced to take sides between the warring leaders. And while power struggles persist, personal struggles tear at the club’s war vets, many of whom wrestle with post-traumatic stress. One club member won’t be returning next season as The Laffing Devils say goodbye to one of their own in a tragic death during tonight’s season finale.

For Discovery Channel, David Pritikin is Executive Producer of THE DEVILS RIDE.

What do you think? Have you been watching Devils Ride? Are you glad to hear that it will be back for a second season?

Get Gipsy back and the rateings will follow him into your channel.He is a Badsss and rocks, he was the reason we all started watching in the first place. BTW Sandman is a fuckinPUSSY

hahaha a bunch of old gummers. this is the lamest biker gang . I hope that black guy comes back and shows them whats up

This show is a joke. Alot of tough talk with no action. FAKE !!!!

Just started watching this show. My husband and I love it. It looks like we missed a a lot of the show. I hope it’s not true what I hear about Gipsy. Snubz is my favorite. He’s the only one that tries to keep peace and enjoys the company of his brothers.

I Love the show, I guess you have to live the life to relate, It was a great surprise to hear they were coming back!!!, I DVR’d the whole season, and the season opener was to die for, I LOVE SIN MOB!!, Bubba, and Deisel are freaking awesome, SandMan needs a tude adjustment…. Gonna get someone messed up behaving like a bully!!!, LOL

The cop car that pulled up to the alley when the two groups where going to fight was fake thats why they blocked out the police logo on the side of the car, also notice not one punch is ever thrown. Its all staged…

I love the show! I do think you need to tell the whole story not just part!like,”what is actual reason why billy the kid is a no show and exactly why gipsy is not there?

This is a dam good show. It is much better than some dumb ass comedy on the other networks.

I do miss alot of the other guys. But this is a new way to watch too. But a MC need alots of members to watch like before. Like in Football why we all watch ? So many differ players on the field at the same time. We need more players on both MC to watch with more fun.