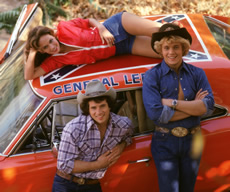 Times have certainly changed. There was a time when an appearance by the stars of the hot Dukes of Hazzard series would have caused a stampede of fans. Now, over 20 years after the classic series went off the air, it appears that some feel about as warmly about “the Duke boys” as Boss Hogg.

The Dukes of Hazzard was an incredibly popular series that ran on CBS from 1979 until 1985. The show followed the adventures of Bo and Luke Duke as they evaded the corrupt Boss Hogg and his inept police force. The adventure series inspired two spin-off shows (an animated version and a short-lived series centered around dimwitted Deputy Enos), and two reunion movies in 1997 and 2000. The series starred John Schneider, Tom Wopat, Catherine Bach, Denver Pyle, James Best, Sorrell Booke and, of course the Duke car, the high-jumping General Lee. A film remake hit theaters in 2005 and a prequel DVD movie was released this month.

Actors Schneider and Wopat have each had successful careers outside of The Dukes of Hazzard. Schenider has worked on many TV shows and films as well as played Jonathan Kent for five seasons on Smallville. Wopat starred with Cybill Shepard on the Cybill sitcom, and has appeared on Broadway in Glengarry Glen Ross and in a long run of Annie Get Your Gun, first opposite Bernadette Peters, then Susan Lucci and Reba McEntire.

Though Wopat was the one to release a couple of music CDs, both former Dukes have a history of singing performances. They sang several times on The Dukes of Hazzard and even sang the Dukes theme together on the 2006 TV Land Awards. But it seems these days that not everyone is so fond of the duo.

The Cincinnati Pops Orchestra has recently cancelled a planned Dukes-themed event that would have featured Wopat and Schneider performing. The cancellation is said to be due to pressure from some in the Ohio community who feel The Dukes of Hazzard was a racist and offensive program. A statement released by the orchestra said, “We decided that some of the messages conveyed in the program are not consistent with the efforts of the Pops to reach out to all members of our community.”

Edith Thrower, the president of the Cincinnati branch of the National Association for the Advancement of Colored People (NAACP), said she was contacted a few weeks ago by the Pops conductor who wanted a reaction to the planned July 14th event. Thrower said, “I contacted our national office and was advised that it would be best if we didn’t support an effort like this. It’s very clear how we feel about the Confederate flag and the long and arduous fight we have conducted to get rid of that symbol of a very unpleasant time in our history.”

Former Georgia Congressman Ben Jones (who played mechanic Cooter on the series) was dumbfounded by the action. He believes the cancellation amounts to a “blacklisting of these guys out of some kind of political correctness that is just plain wrongheaded.”

Democrat Jones continued, “These guys are great people and great singers. To not use them because they were part of a show that some misguided people find racist is just wrong. This is a benign family show loved by people of all ages and races. I have fought racism and bigotry my whole life and worked in the civil rights movement, and there is nothing racist about it.”

For his part, though he and Wopat had been contracted to appear the event, Schneider says he doesn’t want to start a feud over the decision. He said, “It’s a huge shock to me that in this day and age people could be so narrow-minded, especially professional people.” Schneider continued, “I would like for people to examine their motives, however, and their knee-jerk reactions to someone else’s prejudice and bigotry.”

Hmmmm. I can honestly say that I don’t recall the Dukes series being racist in any way. Now, mindless? Well, that’s another story entirely. Tell us what you think and stay tuned!

guillermo ni, no race is better than no one, if you really believe that then you need some serious education my friend. i’m a dukes fan too, but it seems to me that you’re too much of a dukes that you’re deeply offended by what the show, is being accused of.

The Cincinnati Pops Orchestra and the black KKK also known as the NAACP know where they can shove it. I’ve had it up to here with these lowlife libturds looking for any excuse to push their agenda. And this so called political correctness is just another way to push their agenda. They hate anything that portrays rural white southerners in a good way. That’s what their whole problem is with The Dukes of Hazzard. If the show had portrayed all white southerners as the bad guys and used blacks, mexicans and urban left wing white yankees as good guys in… Read more »