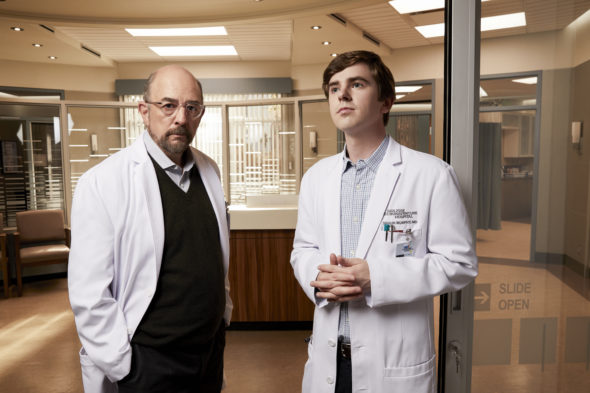 The fourth season of The Good Doctor averaged a 0.57 rating in the 18-49 demographic and 4.15 million viewers. Compared to season three, that’s down by 34% in the demo and down by 29% in viewership. Find out how The Good Doctor stacks up against other ABC TV shows.

Will ABC cancel or renew The Good Doctor for season five? The series does well for the network and ABC needs to keep cultivating newer drama series. I have no doubt that it will be renewed. I’ll update this page with breaking developments. Subscribe for free alerts on The Good Doctor cancellation or renewal news.

5/4/21 update: The Good Doctor has been renewed for a fifth season on ABC.

What do you think? Are you glad that The Good Doctor TV show has been renewed for a fifth season? How would you feel if ABC had cancelled this TV series, instead?

I LOVE the Good Doctor! PLEASE don’t cancel it and keep renewing it!!!

Please keep The Good Doctor on. We enjoy watching it.

Please keep the good doctor going! I love the show!

Please renew the Good Doctor! I love this show!

PLEASE don’t cancel The Good Doctor. I’ve watched every episode since it first came on and it is one of the best shows on prime time TV. I would really miss it!

They need to keep this show on my friends and I get together to watch it all the time. This is a wonderful program and it helps to make people aware that autistic people can also be an assets the workforce and community.

Renew for a fifth season

I love and look forward to The Good Doctor. I pray this wonderful, well written and clever series continues.

I really love The Good Doctor and will be very upset with ABC if they cancel the best drama on tv.