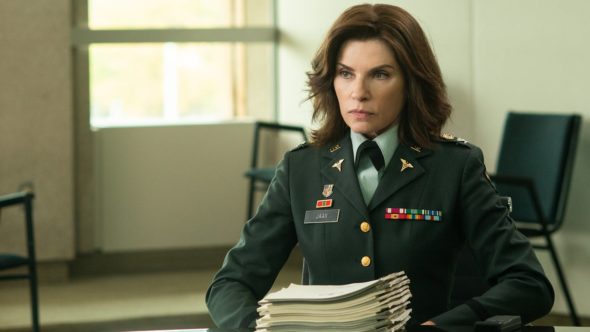 Did you watch The Hot Zone? According to Deadline, Nat Geo is considering turning the limited series into an anthology TV show.

A drama series, The Hot Zone is “inspired by the true events surrounding the origins of the Ebola virus and its arrival on U.S. soil in 1989. In it, a heroic U.S. Army scientist, Nancy Jaax (Julianna Margulies), working with a secret specialized military team, puts her life on the line to head off the outbreak before it spreads to the human population.”

Although nothing official has been announced, National Geographic Channel is reportedly considering a second season of The Hot Zone that will tackle “a different health-related crisis where science is a big factor in finding a solution to potential epidemic or public panic.”

Since its debut late May, The Hot Zone has become Nat Geo’s highest-rated scripted series and is a potential awards contender for the network.

What do you think? Have you seen The Hot Zone? Would you watch a second season?

I would most defiantly love to see a second season, its been well over a year since the premier and I have been anticipating what would come next. I am becoming less and less optimistic that this show will continue even with the hype that has surrounded this, I grew up reading the Jame Paterson’s book The hot zone when I was a child and loved it, I had always hoped that one it would come to tv and now that it has it is just as good if not better then what I had hoped. Just like the book… Read more »

Yes… would definitely watch a second season… I could not stop watching the episodes and it was masterfully done. Great job… This should be up for an award.

Outstanding and a must see. Characters, setting and storyline all fantastic. Julianna Margulies surely will be nominated for her portrayal

I would love to see a season 2!!! Excellent show!

I loved the show! Please bring it back!

Please keep it going! I love the first season and hate to see it end.