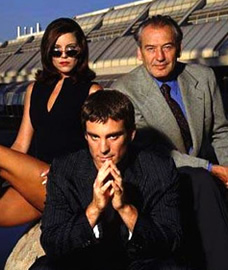 TV show description:
As a young boy, genius Jarod Russell was taken from his parents and trained in a fortress-like facility by the secret organization known as The Centre.

He is raised by kind psychiatrist Dr. Sydney Green (Patrick Bauchau) and trained to become a “pretender,” someone who is able to flawlessly integrate himself into any profession or lifestyle. Eventually, pretenders are sold to the highest bidder and are used for a number of nefarious purposes.

As an adult, Jarod (Michael T. Weiss) escapes The Centre to search for his parents and expose the organization. Other pretenders that are hot on his trail include alluring assassin Miss Parker (Andrea Parker), and the team of Brigitte (Pamela Gidley) and Bobby Lyle (James Denton).

There were some follow-up movies that answered most of the questions. If you haven’t seen them, that might help. One of the biggest unanswered questions that fans have though is what Miss Parker’s real name was. The funny part is that it was right in front of us all along. Her first name actually was Angel, but all of us thought that her father was calling her “angel” as a parental pet name. Jared even called her “Angel” one time but we thought he also was saying angel as a pet name just to mimic her father. I don’t remember… Read more »

Here real name was not angel if you want the show you would have seen the episode where mr.parker tells the story of how he almost fell off a ladder and killed himself except his 3 yr old daughter yelled for him that a step was missing. After catherine parker said she was his guardian angel and he started calling her his angel.

please do a final episode and answer all the questions. Still waiting.

What a sad loss for all of us that this show ended–I believe it would make a hit once again if they brought it back. I hope they do bring it back.

the pretender needs to continue.as far as I can remember there was never an ending.

I don’t think the show would be what people wants to see. ( I mean look at whats on today?) But most of us fans would pay for a movie on DVD if it close it out, end it some how. But don’t put him back in.

Ok, so we all just watched all the shows again and movies and like everyone else, were are we on the continuation? How about even writing books if need be? ANYTHING PLEASE !!!!

This was an incredible series, any chance it might return? It would truly be a hit!

By the way if I am not mistaken Jarad cant merry miss Parker as there is a hint that they may be brother and sister. Still what about the rest. What happen’s to the baby, the scrolls did Mr Parker kill his wife, is he Miss Parkers father. Answer’s would be good.

I believe they were cousins Miss Parker and Jarod. In an episode, there was a picture of their mothers together as adults, with everything that was going on on the show my takeaway was that their mothers were sisters or cousins.

Actually no they are not related if you saw the episode bloodline in season two when miss parker discovers she has a brother and the red files sydney tells jared about miss parker having a brother and she even thinks it could be him but jarod tells her that he is not her brother and narrowed it down to either mr. lyel or angelo. The show tried to answer that question at the begining of the series it seems more logical that jared and miss parker were being groomed to run the centre together and by the final movie they… Read more »

Why on earth did you end the series, with every thing hanging in the air.
I don’t know why but what I do know is it suck’s. Bring the show back with answer’s
PLEASEEEEEEEEEEEEE.

It is my understanding that the series was canceled by NBC. NBC is known for canceling good series anyone remembers Heroes.

Unfortunitly the show was cancelled during the tv strikes and then picked up by another network for 4 movies only after two the networked cancelled it which meant they didn’t get to finish the shows as planned and answer how it all ends my guess is jared ends up with miss parker it seemed to hint that way especially after the last movie and there almost kiss. I think their is two options either jared and mis p come together and take out the center (by the last movie she didn’t seem to interested in chasing jared) or b jared… Read more »