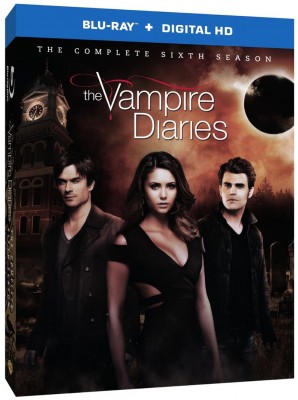 Season six was a big year for some of the residents of Mystic Falls on The Vampire Diaries. If you missed the supernatural drama, we have three chances for you to win the Blu-ray set so you can catch up before the start of season seven.

In season five, after a passionate summer with Damon, Elena headed to Whitmore College with Caroline, not knowing Bonnie sacrificed her life for Jeremy’s. Meanwhile, Stefan and Caroline’s friendship deepened as they stood up to the Travelers, a nomadic witch tribe driven to strip Mystic Falls of magic and cast out its supernatural residents. In the shocking season finale, Damon, fearing he would lose his loved ones on the crumbling Other Side, made a huge sacrifice to bring them all back — with catastrophic and heartbreaking results. Season six follows the characters’ journey back to each other as they explore the duality of good versus evil inside themselves. Matt Davis reprises his role as Alaric Saltzman, recently returned from The Other Side. Plus, the season will make you misty-eyed as the departure of a major character will turn lives upside down and leave us asking what happened to Mystic Falls.

The complete season set goes on sale on September 1st and sells for $54.97 (less on Amazon) but you can try to win one of three copies here. To enter, you need to merely post a comment below. You can enter once per day. Be sure to include your email address in the appropriate spot so we can contact you if you win.

9/1 update: Congratulations to Melissa Perez, Brad Stitely, and Amanda who won the prizes in this contest. Thanks to all who entered — more contests to come!

The Vampire Diaries has a phenomenal cast, and is a well written series!

I love this show! I married a scyfy geek and he turned me into one too….lol

Fingers are still crossed to win!!

Entering again so that I can try and win and get caught up with this season since I missed the whole thing.

I loved season 6. But I’m wondering how season 7 will be without Nina Dobrev.

I love this show and try not to miss an episode. Great cast and storylines. I hope to win this.

I love the vampire diaries my birthday is this Friday this would be the best gift!

Hoping I win so that I can get caught up with season 6 since I missed the whole thing,before the final season starts.

Vampire diaries rocks! The cast is sexy and diverse. The twists and turns in the story keep me reeling. It has just the right amount of sex, violence and Supernatural fantasy to fire my vicariously needy imagination. As you can tell, I’m hooked.
Dennis Sheaffer

I would love to win this blueray set i love the vampire diaries it always manages to keep me on the edge of my seat definitely my favorite show!

I would definitely love to win this.

My DVR felt the need to reset itself midway through the season. I missed everything from the beginning. Would be great to get this in order to catch up before the new season starts.

Like I said previously,I missed the entire season,so I hope I win so I can get caught up before the final season starts.

Season six…..fingers and toes crossed I win! I need to win this!

I would love to add season 6 of The Vampire Diaries to my Blu-ray collection! Thanks!