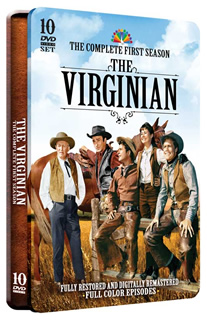 Though it isn’t remembered by many TV viewers today, The Virginian TV show was one of the most popular Westerns in its day. The NBC series ran for eight seasons, from 1962 until 1970. The characters returned in the 1970-71 season in a different format and the show was renamed The Men from Shiloh.

The Virginian series follows the adventures of a strong-willed man known only as the “Virginian” (James Drury) who works to maintain order on the Shiloh Ranch in Wyoming. Other regular actors during the run of the series include Doug McClure, Lee J. Cobb, John McIntire, Charles Bickford, Stewart Granger, Clu Gulager, Gary Clarke, Randy Boone, and Roberta Shore.

It’s often been remarked that The Virginian had such high production values that each episode looked like a feature film. The 249 installments are 90 minutes apiece and were all shot in color; a rarity for its day.

Now, nearly forty years after the end of the series, members of the cast are reuniting as part of the 10th Annual Saddle Up festival in Pigeon Forge, TN. On Saturday, February 27th, Drury, Clarke, Shore, and Boone will come together for a special three hour event that will include a meet and greet reception, a Q&A session, clips from the series, and autograph sessions.

. Patrons of the festival can be among the first to purchase the DVDs since they won’t be available in regular retail stores until May 25th.

Tickets for the festival are $20 each for adults or $50 for the four day weekend, February 25-28th. Kids under the age of 17 are free. Aside from the reunion, the festival also features Western-themed concerts, shows, poetry readings, and dining. The Virginian castmembers will be attending each day, in addition to the reunion event.

i wish it had never been canceled

I emailed INSP was told they had sold the contract to someone else. So I thought I would try it on Netflix now I can’t find it on there either. Where can I still watch it at ????

Hi does anyone know how to send a normal fan letter to Gary Clarke by post any info would be greatly appreciated, happy trails from New Zealand.

Hi from new Zealand just love Gary Clarke as Steve Hill really the stuff dreams are made of I watch the Virginian an episode a night on DVD sighing all the while you guys are so blessed to be able to meet them in person especially Gary /Steve .Happy viewing.