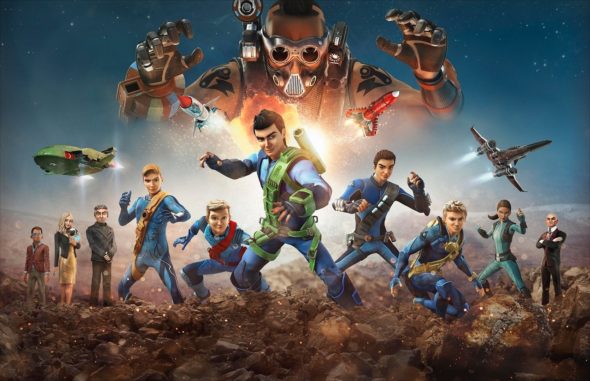 TV show description:
A remake of the 1960 television series, the Thunderbirds Are Go! TV show is a futuristic animated British-Australasian sci-fi series. The action centers on the secret organization, International Rescue.

International Rescue has its headquarters on Tracy Island, a hidden base in the South Pacific. While the team members’ identities aren’t the stuff of general knowledge, their heroism is. Even the sneaky strategies of “The Hood,” an enigmatic international criminal, are no match for their courage and drive.

Patrolling the underwater search and rescue beat is Aquanaut Gordon Tracy (Menkin), on Thunderbird 4, his mini-submarine.

Rounding out the fleet is Thunderbird 5, a communications and logistics satellite hub, which operates under the watchful eye of Space Command Communicator and Dispatcher John Tracy (Brodie-Sangster).

From from the depths of the oceans to the highest reaches of space – when others need help, Thunderbirds Are Go!

What do you think? Do you like the Thunderbirds Are Go! TV show? Do you think it should be cancelled or renewed for another season?

I have been a fan since 1960’s. I absolutely would love to see how International Rescue fares with Jeff (Lee Majors providing the voice) returning to the fold. This is one of the few shows that remains true to the original concept. Please see fit to continue the adventure! It is wonderful to see the family composition portrayed in a format that children, parents and grandparents as well can watch and enjoy together.

This show is brilliant and the episodes just keep getting better. Loved not just by my son (who is Thunderbirds crazy) but by our whole family. Please, please, please do not cancel it!

I think Thunderbirds should continue, it is a great show. I was a fan of the original series in the sixties and this reboot is very well done.

Show is great, don’t not cancel

I am the oldest geek/nerd in existence. I grew up on TB’s in my early years and to this date have not stopped. To those that brought this back and their hard work. Thank you! But please DO NOT STOP! The music, the stories the feelings!

I thought the old series was great . The new series is brilliant. Please don’t cancel it.

I love the original show, grew up watching, but I also love this version and enjoy watching it over and over. I hope it never gets cancelled.

Thunderbirds are go is a great uplifting and edifying program. It helps my son see that working hard and helping others is more important then selfish pursuits. I remember it as a child watching the puppets and now I get to see and share the excitement that family working together can achieve. Every year we look forward to the next season’s release. Please don’t break our hearts. Thunderbirds Are GO!!!!