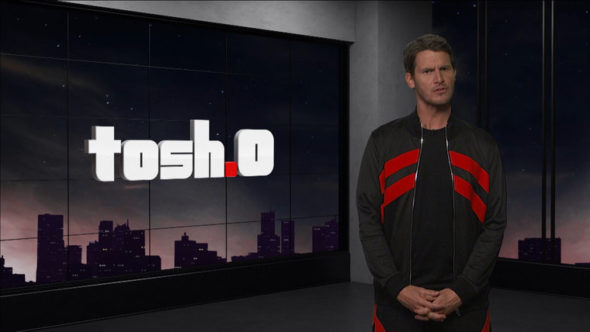 There is also a chance of more shows by Daniel Tosh appearing on the network at some point in the future with a first look deal also now in place.

Comedy Central revealed more about the extended renewal of Tosh.0 in a press release. Check that out below.

“Comedy Central today announced an overall deal with Daniel Tosh that includes a four-season, 80-episode extension for Tosh.0, as well as a first-look deal for new scripted and unscripted development to potentially feature Tosh on camera, as well as vehicles for other talent. The #1 brand in comedy and Tosh are currently in discussions for an unscripted series in which Tosh would host and executive produce and a script deal for which he would serve as an executive producer. The four-season extension of Tosh.0 will take the long-running franchise through its 16th season. In addition, Comedy Central will launch a dedicated Tosh.0 channel on YouTube in early 2020 and today launched a Tosh.0 channel on Pluto TV, the leading free streaming television service in the U.S.

“I’m very excited and grateful!” said Daniel Tosh. “I just wish my parents got to see me reach this level of success. They’re both still alive, but they only have Netflix, Hulu, Amazon, Apple TV, and Quibi.”

“It is a testament to Daniel’s creative genius and expertise as a producer that he can keep a series thriving for 16 seasons while juggling stand-up projects, touring, and new-series development” said Sarah Babineau and Jonas Larsen, Co-Heads of Original Content. “Through this Tosh.0 extension and first-look deal with Daniel, we are excited to keep working with him for years to come.”

The Tosh.0 channel on Pluto TV features episodes 24/7 from the series’ library starting with the first three seasons with episodes from additional seasons from the library to be added on a rolling basis. Tosh.0 joins other Viacom IP to be featured on Pluto TV, including channels dedicated to Crank Yankers, The Hills and RuPaul’s Drag Race, among others.

Comedy Central will launch a dedicated Tosh.0 channel on YouTube in early 2020, providing the series with another platform for premiering show clips, exclusive videos and library content from its previous 11 seasons.

On linear, Tosh.0 has owned Tuesday nights since its launch and has out-performed the competition as Tuesday night’s top original comedy in cable every year with M18-34. On social, Tosh.0 has a combined social footprint of 9.4M fans, the second largest Facebook audience among Comedy Central shows following South Park. The show’s growth on Instagram has accelerated in 2019 with over half of the 519K followers gained this year. Between January and November 2019, Tosh.0 has generated 234M total streams across Facebook, YouTube and Instagram, up 94% versus the full year of 2018. (Source: LSD, Calendar years. Ad-supported cable. Ranked on impressions. CY2012 thru 11/14/2019. Source: Domo. Total video views across Facebook, Instagram, and YouTube. Date Range: 1/1/19-11/30/19).

Tosh.0 premiered on June 4, 2009 and features razor-sharp humor and biting commentary from comedian Daniel Tosh. The weekly, topical series delves into all aspects of the Internet from the absolutely absurd to the incredibly ingenious. Each episode includes a “CeWEBrity Profile” or Tosh giving subjects of notorious viral videos a second chance to redeem themselves from the embarrassment with which they have become synonymous with their very own “Web Redemption.” The series is executive produced by Tosh, Charlie Siskel, Nick Malis and Christie Smith. Monika Zielinska is the Executive in Charge of Production for Comedy Central.”

What do you think? Are you a fan of Daniel Tosh? Will you continue to watch more seasons of Tosh.0?