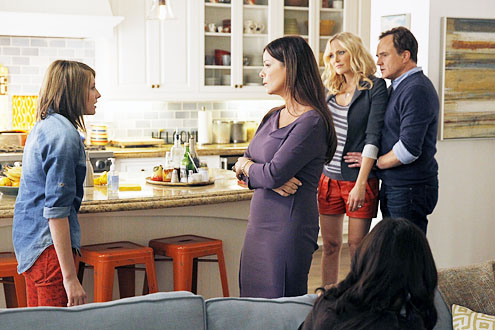 The Goldbergs will be back next season but the same can’t be said for its companion series, Trophy Wife. ABC has cancelled the show after one season of 22 episodes.

The sitcom started out okay in the ratings but they quickly dropped in subsequent weeks. They really fell after the end of 2013 and this week’s episode hit a series low with a 0.7 rating in the 18-49 demographic and 2.48 million viewers.

Of the news, Akerman tweeted, “Thank u all for your loyalty and passion #TrophyWife fans. We had a blast! Sad to see it go but happy to have lifelong family out there. Xx”

The final episode is scheduled for next Tuesday night, May 13th.

What do you think? Are you sorry that Trophy Wife has been cancelled? If you ran the network, would you have renewed it for a second season?

This show was funny and just awesome. Cant believe its not coming back on. Please someone pick it up. It deserves to stay on. Great show.

So sad they are not bringing this show back. It was my favorite show.

So sorry that they cancelled this show. It was funny & fresh.
ABC put it on at a bad time slot.. And now there putting the Goldbergs on after Modern Family, which is where the Trophy Wife should have been.

The Kids & cast on Trophy wife were great!! Very Sad its been cancelled!

I LOVED THE SHOW. So sad to see it go it helped me get through a lot . Please reconsider !

SO sad that they’re canceling Trophy Wife–I found it to be a very humorous show! It’s not raunchy, ALL three of the women (two ex-wives and current wife) brought such a unique brand of humor to the show that I hate to see it go. And the kids? All three funny (especially Bery!) yet none of them were annoying. Truly wish the powers that be had simply marketed/advertised it better because the show itself was a true gem!

dear carly, i feel the same! i don’t know if the actors would be interested in participating, or who i would contact (such as the show’s creators, and/or the actors on twitter?) or how to get in contact with them (?), but i’m thinking about starting a kickstarter campaign to try to help fund some way for the show to get saved, whether a web series or whatever…

I can’t believe cancelled trophy wife and kept some of the other so called funny shows!!! liked trophy wife, Bert was adorable! gonna miss it!!!

trophy wife’s cancellation is just heartbreaking 🙁 what i loved most about the show was that, without much raunchiness (i only noticed one really “adult” joke…the blow-pop one), it was F-U-N-N-Y! …and heartwarming …and it was so nice to see this big, loving family – even including ex wives, without sniping at each other… i also loved seeing bradley whitford in a comedy too (and again, not too raunchy), and malin akermann was so sweet, michaela watkins was HYSTERICAL!, marcia gay harden was stellar as ALWAYS, bailee madison and ryan lee were so likeable(!), and little albert tsai cracked me… Read more »

I loved the show, which had its own voice.

Unfortunately that voice turned out to be one note.

I really enjoyed Trophy Wife. This is a fresh show with unusual interactions. This show is thoroughly entertaining. It’s one of my favorite things to watch. However because of my busy schedule I end up catching up on it online later. Please don’t cancel this show. Give it another season please!

this is a funny show

Too bad. This was one of the better sit-coms on TV. Quality writing and cast – not insipid like so many of the much lower quality competitors that survive.

I absolutely love The Trophy Wife and think it is hilarious!!!!! What a huge mistake in cancelling!!!!!! PLEASE DO NOT CANCEL AND RECONSIDER!!!!!!!!!

I loved this show and its cast. Very sad about the cancellation…it’s way funnier than any other comedies out there. Will miss you Trophy Wife!!!

Love this quirky sitcom and all the characters — great writing too. These made it fun to watch and the fact it did NOT have a laugh track. Never missed an episode. Sorry it’s been cancelled,

that’s too bad I love trophy wife and the goldbergs