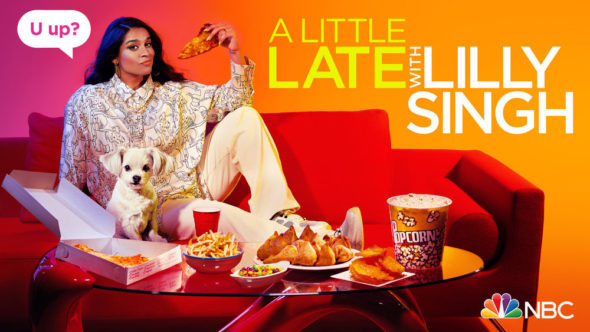 NBC is saying goodnight to A Little Late with Lilly Singh in June. While the peacock network and Singh aren’t calling this a cancellation, the late-night program’s last original episode will air on Thursday, June 3rd at 1:35 AM (so, technically June 4th). NBC is reportedly considering options non-talk shows to fill the timeslot.

Debuting in September 2019, A Little Late took over the late-night timeslot that had been occupied by music-centric Last Call with Carson Daly since January 2002. Hosted by comedian, author, and YouTuber Lilly Singh, the show features celebrity interviews, talks about current events, musical performances, sketch comedy, and game playing. Singh is the first person of Indian and South Asian descent, to host a major network late-night talk show.

It was announced in December of last year that the series had been renewed for a second season and that commenced in January. There had been a big gap between seasons because of the pandemic. Several production changes were made for season two and Singh began filming episodes in her home.

Today, Singh and NBC announced that A Little Late would be coming to an end but Singh will continue working with NBCUniversal. She has signed a first-look deal with Universal Television Alternative Studio to develop unscripted content. Singh is also developing a comedy series with Black-ish creator Kenya Barris for Netflix.

“I’m excited to take this next step in my relationship with NBCUniversal and launch a new partnership between my company Unicorn Island Productions and Universal Television Alternative Studio,” Singh said. “This is a career step that I could only dream of when I started out as a creator, and I look forward to working alongside their team to create projects that bring underrepresented voices to the forefront.”

“We are thrilled to bring even more laughter to Universal Television Alternative Studio by partnering with Lilly Singh. Time and time again, Lilly has proven herself as a creative visionary and storyteller who captivates and engages audiences. We look forward to seeing what exciting projects come to life for everyone to enjoy,” noted Toby Gorman, president of Universal TV Alternative Studio.

What do you think? Did you watch the A Little Late With Lilly Singh TV series? Are you sorry that there won’t be a third season?

I really will miss A Little Late with Lilly Singh. I liked the change in format for season 2. Lilly is so creative and funny with her different characters. I feel like I learned a lot about her South Asian culture. I hope she is able to grow her presence on TV. Thank you Lilly for sharing your self and humor with us.

Impossibal. She was flexing last year about having em never before seen high ratings.

Lilly is so fresh with her quite offensive identity politics comedy, always bringing up her gender & color like a victim. Somehow people are not supposed to be offended by all the rampant racism that NBC somehow allowed to go down in this show. Viewers getting rightfully offended by such supposed comedy, clearly not the cause of the show’s problems.

My guess a lot had to do with format change brought on by Covid. I dont think it was appealing since the best part of Lily was her interaction with guests and skypeing just dont cut it

I like Lilly as she’s fresh and not one of the same old talk-show hosts. I just wish it was on earlier as I don’t have a DVR and am zonked by 1:35 AM!