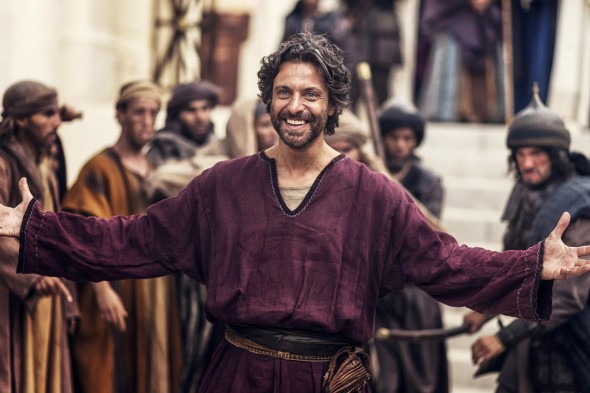 It is a great series!
Defenitively I will be intersted to watch more episodes.
Great performance, story, background location , costumes … very complete and enjoyable to watch

The liberal elites will try to put a stop to this, for obvious reasons.

At least do a DVD series

this was a great show! please continue with a 2nd season!

Yes I would love to see a season 2! They need to finish it all the way. I finally got to see season 1 for the very first time. I loved it

Surely if ever there was a story worth telling (and as astonishingly well as Season 1 heralded) this is IT. A total abomination that Season 2 isn’t in production.
We need to learn more of Saul and Peter’s journey in Christ, how far Caligula and Pilate go, wonderful Cornelius’ tale, who killed Leah, and so on.
A truly inspiring and insightful dramatisation. My husband and I were ‘hooked’ and watched Season 1 in just 2 days.
Please please make more of this calibrate Biblical drama.

i have a large collection of biblical series and movies…. AD the Bible continues season 1 was sensational. I am saddened that season 2 has been cancelled, in this day and age where ratings and money are all that seem to matter,….just goes to show where we are headed ……into even deeper darkness !!! I truly hope that you could see into your HEARTS and reconsider !!! …. GOD bless for beginning something special, but I hope and pray for this dramatic/wonderful series to continue……IT HAS TOUCHED MANY SOULS …

Do we see what God is showing us from Gensis to revelations. That what was the history, is today the mystery ( Christ in us) we have to understand the main reason way the temple was destroyed in AD 70. The new covenant with us. Gone with the old and in with the new. This was really a great series to whatch. Now I understand revelations much better. I will just like to see the end of the temple

I love both “The Bible” and “A.D. The Bible continues” and I would want to watch it on NBC, Cable, or DVD. Where ever it is broadcast is where I’ll see it!!!

We had purchased Season 1 and know that there was more of this. My 82 year old mother-in-law had enjoyed this tremendously – gave her a clearer picture on the characters. It is the Lenten Season and Season 2 would have been excellent during this time. If season 2 is not to be aired can this please be available on DVD to complete what we have started.

Yes to season 2 if not a 2 hour movie to tie up the lose ends! I would buy the season 2 DVD set. This is a great production and story of salvation.

Yes, would love to see a season 2

Want AD series to return to NBC and yes I would watch this powerful and great series on another channel love this series “POWERFUL” STRONG IMPACT !!!