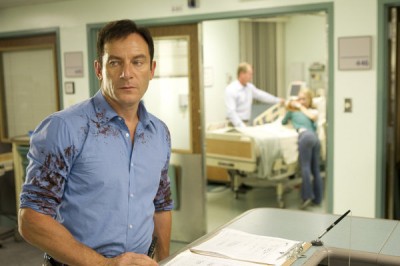 Gosh – the morons at NBC are doing it AGAIN! Seems like every time they get a bold, intriguing, and all around solid drama, they either don’t promote it enough, put it in a bad time slot, or just let it die in season one. “Awake” is, IMO, one of the top 5 shows on network TV right now. You won’t find a better cast (Steve Harris, Laura Innes, B.D. Wong, Cherry Jones, Michela McManus – to back up the protagonist, Jason Issacs). Why go through the trouble of getting these fine actors to carry out out a fantastic script… Read more »

Well said. NBC stands for “Nothing Bold or Creative” after all, this is the network that thought Jay Leno was the prime time answer – that was creative… I agree about Awake being one of the best shows on TV. At this point I may not take chances on new NBC shows, it’s not worth getting invested in characters and stories when they don’t…

Love this show. It’s the only new show I really enjoy.

I look forward to watching this show. I hope that they reconsider cancelling it. The premise reminds me of the movie “Momento”. The acting is first rate, and the plots are more interesting than most dramas of this type.

NBC has a bad history with me for canceling exceptional shows, going all the way back to Boomtown. This network especially seems to bail on shows at the earliest opportunity, whilst moving them around on the schedule when they do actually air episodes so viewers have difficulty finding the show when it is on. Unfortunately for me I am an avid Jason Issacs fan, and I have been unable to avoid getting hooked on the best drama on TV in years. The fact that this amazing show AWAKE airs on NBC guarantees that the excellence will not be recognized and… Read more »

I couldn’t agree more with practically everything you stated, and I was also a huge “Boomtown” fan.
I honestly think they could fire all the “brilliant execs” at NBC, and hire people off the street with half-way decent common sense, and get better results with respect to ratings.

reminds me of the x files really intruiging.if they gave it a shot could get an occult following like x files

I think Awake is the best new show this year. The concept is terrific, and it is very well done. I enjoy shows that require some thought, which is probably why there is nothing but reality shows on tv anymore. Big disappointment if it is cancelled.

I have watched every episode and really find it intriguing. I also really like “The Firm” although I struggled a bit with it in the beginning, I think it has really improved and I get miffed when it isn’t on, like, every 2nd week. I also like “The Gifted Man” so I’m really batting 1000 this year, it seems. Every year, it seems, the shows I like are getting cancelled more and more. If they cancel Fringe this year, which always seems to hang on by its fingernails, I’ll have nothing left to watch. It’s getting that I hate to… Read more »

The idea that AWAKE is on the chopping block is so typical of the Networks and NBC, I don’t think you have anything else but re-runs to put in its place. I think even some of the cable channels would keep it on longer. AWAKE is an engrossing show that you actually have to WATCH in order to keep up. I’m one of those people who actually pays attention to the TV shows I watch. Otherwise, what’s the point? I am disappointed that they’ve injected an apparent conspiracy surrounding the accident although Britten’s double life seems to be a by-product… Read more »

the only reason I am not watching…is because I figured it would get cancelled since I like it. 😉 Every show I like – they cancel…so I just watch reality tv now, or old staples like the Simpsons or Family guy, as I don’t care if they get axed. I’ve been hurt by shows like “Drive” and “jericho” being cancelled…so … i dont watch drama’s anymore

It will be a shame if it gets canceled. Do they count us peeps that watch it online? I’m usually too busy to watch it during its time slot.

The only thing I think they can clean up a little, and they seem to be by adding the visual queues, is the transitioning back and forth. My son noticed the differences between the scene colorings but I didn’t. It definitely keeps you on your toes.

I love the show! Don’t cancel it. OMG. Such a beautifully done and intriguing show. Have been the best drama/action series this year.

Fantastic show!! Give it a chance! Look to your marketing team; their dropping the ball, not the show! Hype it up a little more! This show can make it! Great concept!!!
Please keep this series!!!!!!!