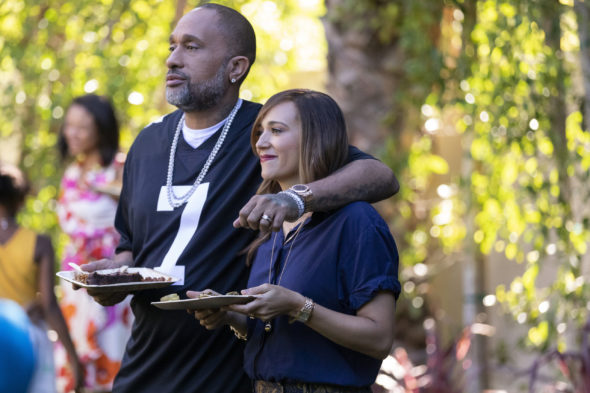 A year ago, the #blackAF comedy series was renewed for a second season by Netflix but the decision has now been reversed. Viewers may still see more of the characters, however. The Kenya Barris comedy may become a series of movies on the streaming service, per Deadline. In October, Barris left his $100M deal with Netflix to form BET Studios with ViacomCBS.

The plot of the Netflix series was described this way:

“#blackAF, whose end as a series was revealed by Barris in a magazine profile for THR, flips the traditional sitcom family on its head. Pulling back the curtain, it uncovers and explores the messy, unapologetic and often hilarious world of what it means to be a “new money” Black family trying to get it right in a modern world where “right” is no longer a fixed concept.”

What do you think? Were you planning to watch season two of #blackAF on Netflix? Would you watch a series of films?

Netflix is crazy. This was one of the funniest most original shows on TV. Better than the Cosby Show. They should have canceled the Obama’s instead!

I was EXTREMELY disappointed there would not be a Season 2! I’d shown episodes to friends; recommended it as a MUST see on FB, etc! It was HILARIOUS, a d perfectly casted, ESPECIALLY Kenya Barris playing Lead Role. My favorite scene was the Wife saving from the Ocean while he took off his jewelry, and later came up with a towel. I HOWLED, and have watched it more than a few times, as well as trying to get the family praise, and set up for the plane pic, and the Black art purchase. Hilarious!! If the series ever comes on… Read more »

THE SHOW WAS FUNNY AF…FOR 5 EPISODES, THEN THE CHARACTERS ALL BECAME MISERABLE ASSBAGS. EXCEPT THE OLDEST DAUGHTER AND THE TWO BOYS. THE DAUGHTER FILING THE FAMILY BECAME SUCH A HORRIBLE PERSON WITH HER CONDESCENSION OF THE DAUGHTER I WANTED HER OFF THE SHOW. KENYA AND RASHIDAS CHARACTERS BECAME HORRIBLE. IT STOPPED BEING FUNNY AND I WATCHED A COUPLE BREAK UP AND WRECK THEIR FAMILY. THATS NOT FUNNY.

Too similar to black-ish in some ways. He should have waited to launch his show when black-ish was over, then hire a talented actor to play the husband. He does not have the acting skills to co-lead a show, no matter how talented his costar is. Plus, how many talented black actors are there who would have done amazing things in his role?

I’m not surprised after the announcement that Barris jumped the Netflix boat, but I didn’t think #Black AF was funny despite the herculean efforts of Rashida Jones. #RIP Black AF.

I never watched it. Thought about it just for her though.