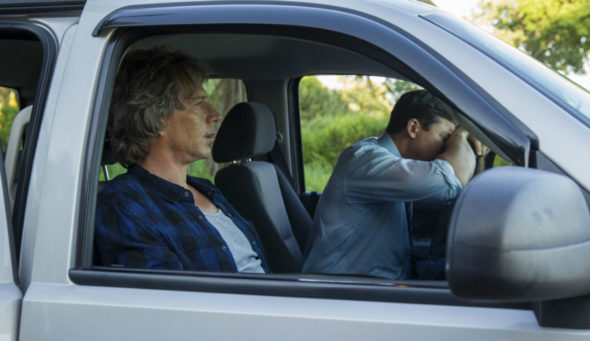 The Bloodline TV show on Netflix has not yet been cancelled or renewed for a third season. Co-creators Glenn Kessler, Todd A. Kessler, and Daniel Zelman have plans for five or six seasons, but right now, they are just waiting to hear on season season three.

“There’s not much to say. The [second season] just launched on Friday (May 27) and Netflix is evaluating how it’s doing for them and it’s performing and are very hopeful that there will be a future as are we,” [Todd A. Kessler] says. He notes that a third season would be financially “challenged” by the end of Florida’s tax incentive but points out the show wasn’t set there for the tax breaks.

“We decided to set the show there and film the show there because it’s crucial to what the show is, not because of the tax incentive, but it does affect things financially for us and the show will be challenged because of that. It makes things more difficult,” he says. “We’re hoping there will be more to come.”

What do you think? Are you a fan of the Bloodline TV series? Have you started watching season two? Do you think it will be cancelled by Netflix or renewed for a third season?

Please please please come back with a 3rd season!!! I have to know what happens with that kind of cliff hanger at the end of season 2!!!!!i love this show!!!!

Yes, bring it back for Season 3. Totally hooked!

One of, if not, the best shows on Netflix! I watched Season 2 in less than a week. There has to be a Season 3 and hopefully many more!!! I AM DEFINITELY HOOKED ON THIS SHOW!!!

I love this series!!! Am hoping there will be a season 3!

We were totally hooked and thought the acting, writting and directing was phenomenal! Please keep it going! Loved the soundtrack BTW!

Definitely keep this series alive. I couldn’t get enough of it. The cast, plot, acting, scenery, and music are all fabulous.

Just finished Season 2 tonight. It’s so intense! The acting is excellent! We love it! Bring it back for another season (or 3)!

I love the show and cast please keep producing!

Love Bloodline and hope to see a season 3

We have finally decided to get rid of satellite and continue with Netflix if Bloodline is representative of what they have to offer. Excited for Seadon 3!!

Excellent Season 2 it must be renewed for Season 3 at least.
.

Love the show, really hope to see more, extremely disappointed if its cancelled