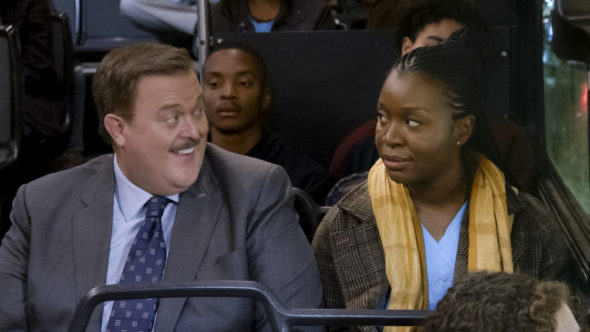 Bob (Gardell) owns a very successful compression sock factory in Detroit and runs the business with his mother, Dottie (Ebersole); his sister, Christina (Monroe); and his younger brother, Douglas (Jones). Stress from the job and his family lands middle-aged Bob in the hospital with a heart attack.

An immigrant from Nigeria, Abishola (Olowofoyeku) came to America with her young son, Dele (Wolf Jr.). The two live in a small apartment with her very protective relatives, Auntie Olu (Adewusi) and Uncle Tunde (Henley).

While he recovers from his heart attack, Bob meets and falls for Abishola, his kind and hard-working cardiac nurse. Undaunted by Abishola’s lack of initial interest or the vast differences in their backgrounds, Bob is determined to win Abishola’s heart.

What do you think? Do you like the Bob ♥ Abishola TV show? Do you think it should be cancelled or renewed for another season?

I love Bob and Abishola. I don’t find The Neighborhood funny.

I think it definitely should be continued to season 4. I love the show

Love this show, at first it was hard to understand with the accents of the characters but now I’m starting to understand a lot better. The only thing that is hard is the sub- titles you remove them to quick and I’m not a fast reader.

Love this show so good and funny worth watching every episode need a good laugh. Please boost ratings.

I think Billy Gardell is an outstanding comedian, accomplished actor and talented stand-up guy. He was wonderfully cast in Mike and Molly. However, I don’t care for his new series, “Bob Hearts Abishola”. I wish I loved it more because I don’t want it to be cancelled. I don’t find it very funny. I think that there is not enough Billy featured and too much ensemble cast. I find it difficult to understand the dialogue and I dislike the subtitles. I will hang in there for a few more episodes.

Love this show, great actors, lots of laughs and the first one of season two was totally hilarious. Wish it was a longer show. Keep this comedy going for a long time, please. Also keep the Neighbourhood going too. LOVE THE COMEDIES

I like the Bob Abishola show so funny, please don’t cancel it.

The best show, me and my husband love this show. The entire cast is wonderful. The show is funny and a laugh is what we all need right now. Show should be on every night.

I Love It!!! It is one of the funniest thing that’s been on Television in a while!!! Along with the Neighborhood, Too Funny! We need to laugh right now!

I love Bob Hearts Abysholla it is hilarious, I also like the Welcome to the Neighborhood