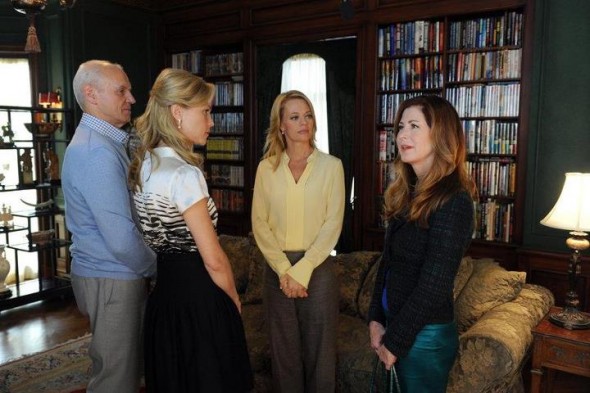 ABC is reportedly looking at resurrecting Body of Proof, their cancelled crime drama. The network dropped the Dana Delany series last May after three seasons.

Discussions apparently began earlier this season and ABC is expected to make a decision within the next month. The network was waiting to see how its new series performed and, if you’ve been watching the ratings, you know they haven’t done very well for the most part.

The goal would be to bring Body of Proof back for mid-season but a lot of work will have to be done quickly to make that happen — including trying to get Dana Delany and other members of the cast back.

What do you think? Would you like to see Body of Proof return? Aside from Delaney, do you think any other castmembers must return for the series to work?

i love this show…bring it back..

I loved this show, I hope they bring it back we would definitely watch it.

Please bring (Body of Proof) back. Dana Delany was great and so we’re all the supporting characters. Please,please,please……..

Bring it back!!!! This is a super awesome show. I was so surprised when they canceled it!

So very much agree with Jai, networks keep the crap and get rid of the great shows. Body of Proof was one of the best, PLEASE bring it back ! But bring it back with the cast from the first season they helped make the show, as when they changed the cast the show tanked. BRING IT BACK !!!!!!!

BRING IT BACK!!!!! This was one of the best shows on tv. I’m sick of networks canceling good shows yet the garbage shows go on forever.

I’m down In Australia and I loved this show they should bring it back!

Yes yes yes please bring it back,the cast and crew was so great,as where the storyline
I enjoyed the show very much,and would love to see it back on the screen.
It is a great show 🙂

ABC would be foolish if they didn’t bring back BODY OF PROOF. It was one of the best shows out there. Have you seen some of the new shows this season. They don’t hold a candle to Body Of Proof

I say bring Body of Proof back. Dana Delaney was so good in this role. I do have to say that the writer’s did a better job the 1st 2 seasons and that is probably why the ratings dropped last year, but it was still a good show.

If you are not showing confidence in your new shows by mentioning bringing back a cancelled show, you probably need some new writers & ideas. Ironsides? C’mon, folks, how many people under 30 even remember the show. I’m surprised it went 3 episodes. Network TV needs a serious make-over.

Please bring it back.

Bring it back it do not understand why it was cancelled in the first place. This was a very good show. Reminded me of Quincy MD and Murder she wrote.

Who makes the decision to cancel shows anyway? I have enjoyed Body of Proof very much and was very disappointed that it was cancelled. Please bring it back.

The networks, based on if a show is profitable enough to take a chance on making more episodes.