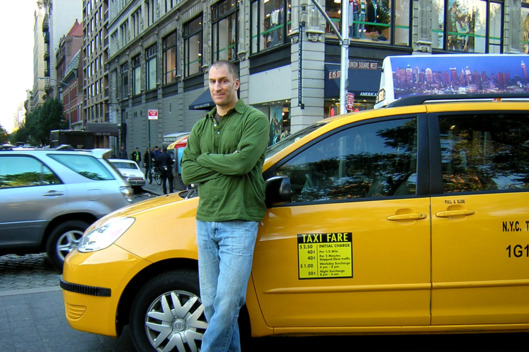 In the interview, Bailey revealed what’s difference about the Cash Cab revival:

The only thing that’s really different is that instead of a mobile shoutout, contestants get a social media shoutout where we go live on social media and people answer. The cab is pretty much the same, but the ceiling is a little different. They can do anything with the lights now, different patterns. We also have celebrities guests who ride with us. Matthew Perry is one … Brooke Shields, Jeff Garlin.”

Later, the host mentioned he’d like to take the Discovery Channel series to other cities and maybe overseas:

We could definitely do it in Chicago… in San Francisco, in L.A. We’d like to be able to do it Las Vegas. Honestly, I’d like to take it someplace where the weather is better because shooting this show in the winter is pretty hairy. International would be crazy for me, especially maybe driving on the other side of the road.”

What do you think? Are you a fan of Cash Cab? Are you excited for the revival?

Love Cash Cab! Glad it’s back. We have watched this as a family and have had a lot of fun.

I’m so excited to see Cash Cab back on Discovery Channel. My wife and I love this show.My Mom is 93 and she loves it too! Glad Ben is back in the drivers seat. We’re very happy they didn’t replace him.The show wouldn’t be nearly as good without him. ROLL ON,CASH CAB!!

YES! So glad Cash Cab is back! And Ben Bailey is great, how does he drive in those streets of NY? — Please come to Chicago, you’ll love it here.