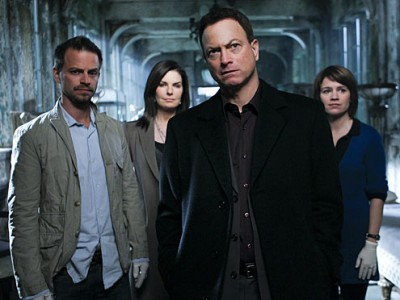 I am agreeing with several others, I think they should be on during the week. They need to replace some of the other stupid shows, like amazing race or wipe out, fear factor etc.

There are VERY FEW good TV shows anymore and it seems that they are cancelling the good ones and replacing them with rotten shows. DO NOT CANCEL ANY OF THE CSI SHOWS.

As for the L & O: SUV, I stopped watching them due to the fact that the new so called actors are terrible. Bring Chris Meloni back – it’s a shame that he is not there anymore. The show has gone straight down the tubes. There is no one to back up Mariska Hargitay acting.

Moving any program to Friday means it will attract primarily the 49+demographic. Everybody else is doing other things that evening.

too bad. Its the only one of the three that i watch any more. the original just wasn’t the same after “Grissom” left. and the miami one got too creepy for my tastes.

I TOTALLY agree with Tiffany.

I’m with you tiffany!

We really enjoy this show and believe that Friday night was great! Also Sella Ward has helped this show a great deal. Please don’t cancel this great show.

I enjoy CSI New York and think the new cast members would up the ratings. Just move it off Friday nights.

All things must come to an end and CSI is no exception just look at Law and Order.

i like the show and the cast…and the time slot.

of course you’ll cancel CSI New York cause I like it. I’m so sick of networks giving the axe it seems to so much of what I like. New shows have come and gone. Of the three CSI’s ,Miami and New York are my picks to stay.

I certainly think it should be renewed, as well as the the other CSI’s. They are great programs, and I truly enjoy them.

It is my favorite CSI series. Moving it to Friday night did not help. The Miami series is awful, I have never liked it!

i think that sucks also i have watched all the csis since they have been on.people want these stupid shows that dont amount to a hill of beans why not take them off instead.the csis are as close as you can get to the real life that goes people need to get their heads examined.thats my opion

I would miss CSI New York very much. I think the cast is excellent and the story lines have all been very interesting. I stopped watching CSI Miami a while ago and as far as I am concerned that is the weakest of the three. If they have to let one go it should be CSI Miami.

The show should be renewed. 18 – 49 year olds are not the only people that watch TV.
Most peole in that age group have other thing to do with their weekends than watch TV-
especially on Friday nites.

sucks. my wife & i still watch it (DVR it). being on fridays sucks for any show