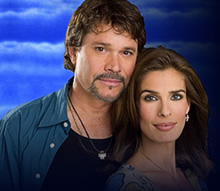 TV show description:
An NBC soap opera that’s centered around the Horton and Brady families who live in middle-America Salem.

The storylines were usually traditional soap opera tales until the 1990s when supernatural and science-fiction elements were introduced.

Please don’t cancel Days! I have been watching daily since 1985 when I was 15 and now am 47. This is the highlight of my day, watching days of our lives. I am tired of the soaps being canceled just to make room for more talk shows and cooking shows etc. I still have not yet watched an episode of a cooking show after another one of my soaps was canceled. There are plenty of other networks to pick up those shows.

LOL! I starting watching in Jan 85 because we got our first VCR. I was 13 and recorded it DAILY for ten years. I had to quit watching in 1995 because I moved and was very busy. But no show in my life had me addicted like that show. If for some reason the VCR didn’t auto record, I would be freaking devastated!

I have been watching this for years I will not ever watch your network again if you cancel this…..and this is for a mega group of ppl in my family and friends….please reconsider!!

I will never watch this network if you take days off the air, no one cares about s meg Kelly talk show

Please don’t cancel this show I use to watch this show with my maw as a child.and I love it still today and even though my mamaw is gone everyday I watch it and think of her.i hate talk shows I honestly see no point in them.because all they do is repeat after the news or whatever and I like a story line.story lines bring excitement and that to me is amazing.i wish you would keep this show and bring back one life to live and all my children and passions and as the world turns and bold and the… Read more »

Please don’t cancel this show. I agree there are too many talk shows and reality shows. I also started watching days at a very young age when my mom watched it as a “stay at home” mom raising her kids. I am now 60 and she is 86 . I realize that some soap actors are not the greatest actors but days has a wonderful cast especially those who portray the characters of NICOLE AND CHAD .

It will be such a heart break if NBC cancels DAYS. This long running series is a legend. If you took a poll, at least one person in every household has heard of the show and / or watches it. Please no more news/ talk shows!! NO NEWS IS GOOD NEWS!!!! PLEASE KEEP DAYS!!!

NO!, NO!, NO! there are enough news and daytime talk shows for the people who want that. Leave this daytime soap (DOOL) alone. It’s the Only one I love and have watched and taped when I cannot watch, to watch later. I have listened to this show since I was a young toddler, as my mother before me, watched this daytime soap. Fond memories of her ironing in the dining room with this soap on, always remember the music and voice of the orginal MacDonald Carey. It’s iconic in my mind. My hour to sit and eat lunch and watch,… Read more »

I will not watch Meghan Kelly period.! I love Days of our Lives!

ARE YOU KIDDING! I just heard that NBC is thinking of canceling DOOL. 🙁 What are you thinking…that is the stupidest move I’ve ever heard. I started watching this soap at the young age of 10 with my mother which is now 87 and we still enjoy chatting on the phone on a daily bases about Days….My daughters both started watching DOOL with me at a very young age….it’s a great tradition. Mother’s and Daughter’s bond over soaps. People need an escape from their daily lives and from all the talk shows, bad news of the day and political crap… Read more »

Please don’t cancel Days of our Lives. I’ve been watching since late 60’s.

I am so glad to hear that there is a new writer. Some of the plots have been so poorly done and so many of the best characters are gone. How many times can you keep killing someone off and then bringing them back. Lets be real. I have watched this show since day one and can not believe some of the bad choices going on. Right now you are putting Nicole in jail right after she finds out that Holley is hers and Chloe is way over playing her part….her smart and make something good happen once in a… Read more »

PLEASE DONT TAKE DAYS OFF. I HAVE BEEN WATCHING DAYS SINCE IT BEEN ON AIR.

I lost interest when many of the mainstream characters started dying off via the writers and some characters were just replaced by other actors who weren’t very good. I feel badly for the individuals who have been faithful watchers for many years. I’d say replace it with a show that would have some appeal to them. I believe that Megyn Kelly would be better in a later time slot such as 8 or 9 o’clock. (In my opinion, the whole situation was handled very poorly.)

PLEASE don’t take Days off the air. My Mother, sister and I have been watching this show since the first day it aired. We DO NOT need another talk show esp. from Megan Kelly. There has got to be another time slot early in the morning you could give her. You will be losing a lot of viewers if you take this show off the air!

This world has been changing SO much recently esp. Trump. Please don’t take this show away from us too! It really is our once a day one hour place to go escape this messed up world. Please keep days on.

Days is the only soap that I watch now there are just too many talk shows too many reality shows why take some thing that thousands if not millions of us love away. I’m in MN my sister in Hi and we talk everyday about days. I started to watch it when I was just a girl with my mother. Than my kids with me. And to be cancelled for a talk show comon when does it stop. Enough is enough.