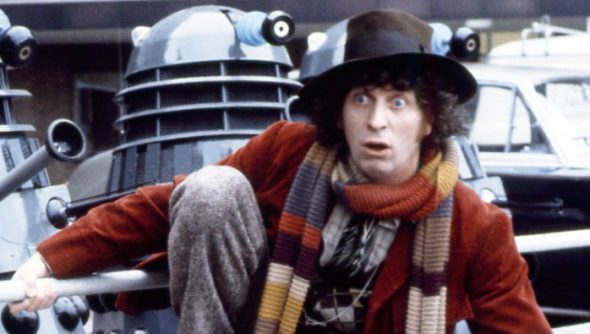 Guess who’s returning to Doctor Who? The Guardian reports Tom Baker has donned his iconic scarf once more to film a “lost” episode of the BBC TV show from 1979.

During Baker’s tenure on Doctor Who, an episode called “Shada” was left unfinished when a strike at the BBC interrupted filming in 1979. Now, almost 40 years later, Baker has reprised his famous role to finish the episode, which was written by famed author Douglas Adams.

“Shada” is available to download now on iTunes. It will be released on DVD on December 4th.

I think it never left me and that’s why I can’t stay away from it. It was a lovely time of my life. I loved doing Doctor Who because it was life to me. My real life was really rather drab compared with the life of Doctor Who when we were making it.”

What do you think? Are you a fan of Doctor Who? Will you watch the “lost” episode?

Tom Baker was and still is my all time favorite Doctor Who. It broke my heart when he left the show. My little boy loved him also, mainly because of K-9.

Paulene,” The Doctor ” Tom Baker . I would watch him any time. In fact I am watching him right now.