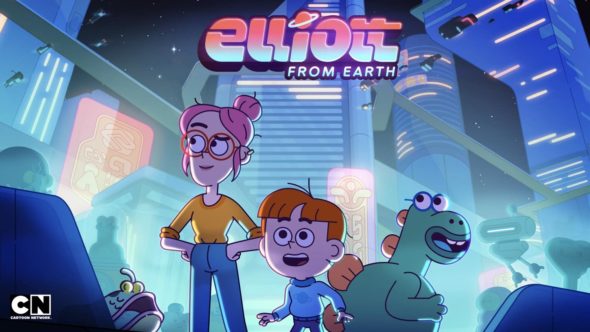 Elliot from Earth now has its U.S. premiere date. Later this month, Cartoon Network will launch the new animated sci-fi comedy series, which follows the lives of a boy named Elliot (Samuel Faraci), his mother (Naomi McDonald), and a dinosaur named Mo (Noah Bentley) after they find themselves in space. The show is produced by Cartoon Network Studios Europe and debuted in the UK yesterday.

Cartoon Network revealed more about Elliot from Earth in a press release.

“Cartoon Network’s next original comedy Elliott From Earth introduces Elliott, his mom Frankie and his new best friend – dinosaur Mo, as they find themselves in space and begin an unexpected journey across the universe to discover why they were brought there in the first place. The series will premiere Monday, March 29 (9:00 a.m. PT/ET) with a two-week premiere event on Cartoon Network. Elliott From Earth will make its debut first in the UK on Saturday, March 6 and will roll out in select APAC, LATAM and EMEA territories beginning this April.

As they learn to call it home, Elliott and Mo explore the Centrium – an exciting place high up among the stars full of amazing aliens and wonderful cosmic creatures who, although different species, coexist in harmony. Elliott From Earth showcases the power of friendship and embraces the wonders of being different, open minded and accepting. Directed by Mic Graves and Tony Hull with voices from Samuel Faraci (Paw Patrol), Noah Bentley (Dragons: Rescue Riders) and Naomi McDonald (Angelina Ballerina: Dance Around the World), Elliott From Earth is produced out of Cartoon Network’s EMEA hub, and the latest from the team behind The Amazing World of Gumball.”

Check out a preview for Elliot from Earth below.

What do you think? Are you planning to check out the Elliot from Earth TV series on Cartoon Network later this month?