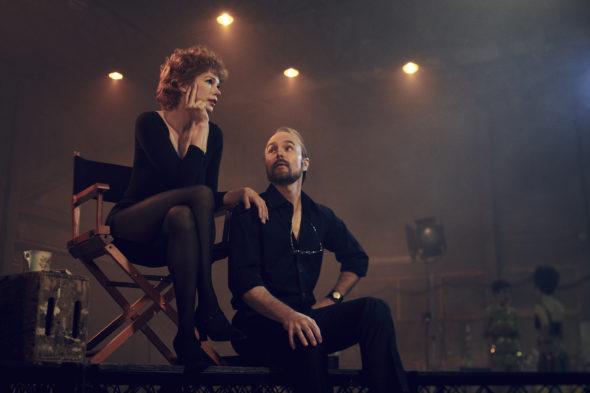 The series covers five decades, during which an originally inexperienced Fosse developed into a legendary artist whose work graced stage and screen. Despite his brilliance (or perhaps because of it) Fosse is not immune from the demons which plague so many in the arts — alcohol, drugs, sex, power, and celebrity.

Arguably the premier Broadway dancer, Verdon finds only Fosse’s work truly showcases her sublime talent. Similarly, only she manages to bring to life what would otherwise be relegated to his seemingly boundless imagination. Gwen is not simply Bob’s wife, but a true partner who plays an integral role in his success.

While Fosse starts to lose control, Verdon’s career flags as she ages, which takes a toll on their marriage. It also weighs on their daughter, Nicole (played by Blake Baumgartner and later Juliet Brett), who tries to please them, even as she struggles to escape their looming shadows.

Bob and Gwen’s circle includes playwright and screenwriter Paddy Chayefsky (Butz); former modern dancer Joan Simon (Cash); Joan’s husband, playwright Neil Simon (Corddry); and theater producer and director Hal Prince (Handler). As their marriage falls apart, Bob gets involved with Anne Reinking (Qualley), who is recognized as a “young Gwen Verdon,” and who wants to follow in the triple-threat’s footsteps, but may not be able to endure Fosse’s demands.

Fosse/Verdon showcases the choreography and dancing that was the duo’s claim to fame, while telling their complicated love story with one another and with their art.

Series Finale:
Episode #8 — Providence
Gwen looks ahead to an uncertain future, as Bob tells the story of his life on film.
First aired: May 28, 2019.

What do you think? Do you like the Fosse/Verdon TV series? Would you have watched a second season of this FX series if there had been more story to tell?