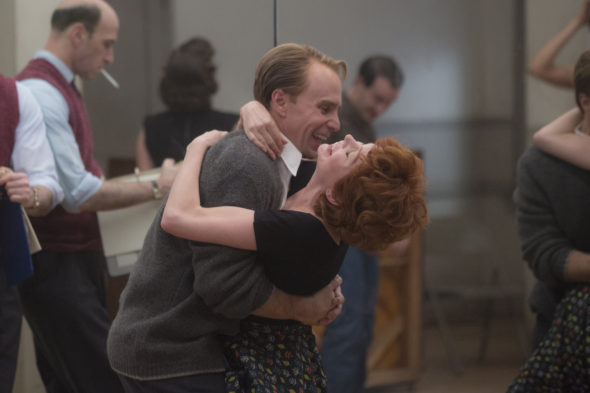 Does the first season of the Fosse/Verdon TV show on FX keep you on your toes? As we all know, the Nielsen ratings typically play a big role in determining whether a TV show like Fosse/Verdon is cancelled or renewed for season two. Unfortunately, most of us do not live in Nielsen households. Because many viewers feel frustration when their viewing habits and opinions aren’t considered, we’d like to offer you the chance to rate all of the Fosse/Verdon season one episodes here. *Status update below.

An FX drama, Fosse/Verdon stars Sam Rockwell, Michelle Williams, Norbert Leo Butz, Aya Cash, Nate Corddry, Evan Handler, and Margaret Qualley. Sam Wasson book, Fosse, the series centers on the professional and personal relationship between Broadway choreographer Bob Fosse (Rockwell) and star Gwen Verdon (Williams). Spanning five decades, it showcases the choreography and dancing that was the duo’s claim to fame, while telling the complicated love story with one another and with their art.

What do you think? Which season one episodes of the Fosse/Verdon TV series do you rate as wonderful, terrible, or somewhere between? Should FX cancel or renew Fosse/Verdon for a second season? Don’t forget to vote, and share your thoughts, below.

*5/31/19 update: The series came to a natural conclusion so it’s clear that there won’t be a second season of Fosse/Verdon.

I love broadway therefore I loved this series. Great acting, direction, music etc. I think one season pretty much summed it up though. Just perfect for my tastes which are all that matters.lol I have recommended it to all my theatre friends who would appreciate this. Thank you. Bravo….and good luck at the Emmys!

Absolutely this show should be renewed. It is my number one favorite thing on television, the show I go to first in my recorded list ( and that is only if I didn’t get a chance to watch it live). I have kept all episodes in my recorded list because I re-watch each episode several times.
There was only so much of the Bob Fosse & Gwen Verdon story that could be told in 8 episodes ; so it is only fair that this show be renewed so that more can be told of this story.

I love this show. I think that the cast is g
Doing a wonderful job. I really hope that this series is not cancelled.

I am really loving this show. I think that the cast is great and hope that it will not be cancelled.

Renew please. In love with the show periods