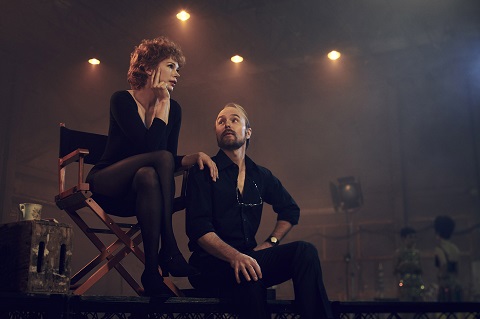 The stage is all set! FX just announced the premiere date for their new TV show, Fosse/Verdon.

The limited series “explores the singular romantic and creative partnership between Bob Fosse (Sam Rockwell) and Gwen Verdon (Michelle Williams). He is a visionary filmmaker and one of the theater’s most influential choreographers and directors. She is the greatest Broadway dancer of all time.”

Based on Fosse, the biography written by Sam Wasson, Fosse/Verdon tells the story of the singular romantic and creative partnership between Bob Fosse and Gwen Verdon. He was a visionary filmmaker and one of theater’s most influential choreographers and directors. She was the greatest Broadway dancer of all time. Together, they changed the face of American entertainment – at a perilous cost. Featuring Fosse’s choreography, the series explores the hidden corners of show business, the price of pursuing greatness, and the suffering inflicted in the name of art.

Kail, Levenson, Miranda, Fields, Rockwell, Williams and George Stelzner are Executive Producers of the limited series that is produced by Fox 21 Television Studios and FX Productions.? Levenson wrote the premiere episode, which was directed by Kail.? Actress, dancer and producer Nicole Fosse, and daughter of Fosse and Verdon, serves as Co-Executive Producer and oversees The Verdon Fosse Legacy. Co-Producer Andy Blankenbuehler is serving as a Choreographer, as is Susan Misner. Erica Kay serves as Producer, and acclaimed composer and arranger Alex Lacamoire is serving as Supervising Music Producer.”

What do you think? Are you a fan of Sam Rockwell and Michelle Williams? Will you watch Fosse/Verdon?

Sorry to say I’m not sure how familiar I am with the actors starring in the show, but very familiar with the icons they represent. You betcha I’ll be watching!

Both of them have had long careers…Michelle was on Dawson’s Creek and has been in several A-List movies like Brokeback Mountain and Blue Valentine. Also…there’s IMDB, it can tell you everything they’ve been in.