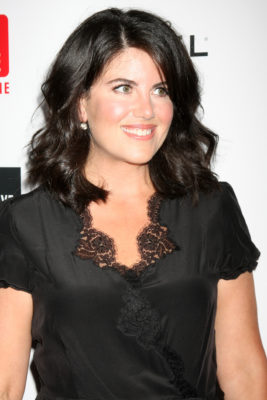 FX has (finally) announced the subject of season three of the American Crime Story series and it’s a familiar one. The show will tackle the impeachment of President Bill Clinton and will be based on Jeffrey Toobin’s bestselling book A Vast Conspiracy: The Real Story of the Sex Scandal That Nearly Brought Down a President. It will star Sarah Paulson as Linda Tripp, Beanie Feldstein as Monica Lewinsky, and Annaleigh Ashford as Paula Jones. Lewinsky (pictured above) will be a producer on the limited series.

The anthology TV show was renewed for a third season back in November 2017 and season two — The Assassination of Gianni Versace: American Crime Story — finished airing in early 2018.

Season three of American Crime Story is set to debut on  Sunday, September 27, 2020 at 10:00 PM ET/PT on FX. Here are some additional details:

Monica Lewinsky Will Serve as Producer

Henrietta Conrad and Jemima Khan Will Also Serve as Producers

Production of the series from Fox 21 Television Studios and FX Production begins in February and it will premiere on Sunday, September 27, 2020 at 10:00 p.m. ET/PT on FX.

Written by Sarah Burgess, Impeachment: American Crime Story unravels the national scandal that swept up Paula Jones, Monica Lewinsky and Linda Tripp as principal characters in the country’s first impeachment proceedings in over a century.

“FX’s American Crime Story franchise has become a cultural touchstone, providing greater context for stories that deserve greater understanding like the O.J. Simpson trial and saga, and Andrew Cunanan’s tragic crime spree which concluded with the assassination of Gianni Versace,” said Landgraf. “This franchise re-examines some of the most complicated, polarizing stories in recent history in a way that is relevant, nuanced and entertaining.

“Impeachment: American Crime Story will likewise explore the overlooked dimensions of the women who found themselves caught up in the scandal and political war that cast a long shadow over the Clinton Presidency. We are grateful to Sarah Burgess for her brilliant adaptation, as well as Ryan Murphy, Nina Jacobson, Brad Simpson, Brad Falchuk, Larry Karaszewski, Scott Alexander, Alexis Martin Woodall, Sarah Paulson and the rest of the creative team and cast.”

The third installment will be written by Sarah Burgess who is also Executive Producer alongside Ryan Murphy, Nina Jacobson, Brad Simpson, Brad Falchuk, Larry Karaszewski, Scott Alexander. Alexis Martin Woodall and Sarah Paulson. Monica Lewinsky will serve as Producer. Henrietta Conrad and Jemima Khan will also serve as producers. The limited series is based on Jeffrey Toobin’s bestselling book A Vast Conspiracy: The Real Story of the Sex Scandal That Nearly Brought Down a President.

Award-winning actress Sarah Paulson has built an impressive list of credits in film, television and on stage. Among the most recent are M. Night Shyamalan’s thriller Glass, Susanne Bier’s Bird Box and Warner Bros.’ Ocean’s 8. She’s also currently producing and starring in an upcoming series titled Ratched, which centers on the early life of the villainous nurse from the 1962 Ken Kesey novel, One Flew Over the Cuckoo’s Nest. Previously, Paulson garnered attention and multiple awards for her portrayal of Marcia Clark in FX’s critically acclaimed miniseries The People v. O.J. Simpson: American Crime Story, not to mention for her multiple roles in Ryan Murphy’s American Horror Story franchise, also for FX. In film, she has appeared in numerous projects including 12 Years a Slave, which received an Academy Award(R) for Best Picture, and Jeff Nichols’ Mud alongside Reese Witherspoon and Matthew McConaughey, for which the cast received the Robert Altman Award at the Film Independent Spirit Awards. Paulson’s stage credits include Roundabout Theatre Company’s production of Lanford Wilson’s Pulitzer Prize winning play Talley’s Folly and Broadway’s Collected Stories and The Glass Menagerie to name just a few. Paulson is represented by Hylda Queally at CAA.

Beanie Feldstein received critical acclaim for her performance as “Julie Steffans” opposite Saoirse Ronan in Greta Gerwig’s Golden Globe(R) winning and Oscar(R) nominated debut, Lady Bird. For their outstanding performances, the cast was nominated for the 2017 Best Ensemble at the SAG Awards. In the same year, Feldstein received recognition for her Broadway debut portraying “Minnie Fay” in the smash hit musical Hello, Dolly! which won the 2017 Tony(R) Award for “Best Revival of a Musical.” For that role, Feldstein received the Breakthrough Award at the Lilly Awards honoring three standout female Broadway debuts of the season. Most recently, she starred in the critically acclaimed FX comedy What We Do in the Shadows and the feature film Booksmart. She will next be seen in Caitlin Moran’s comedic coming of age story, How to Build a Girl. Feldstein is represented by Sharon Jackson & Andrew Dunlap at WME and Stacy O’Neil at Brillstein.

Annaleigh Ashford is an acclaimed and award-winning feature film, television and theater actor. Ashford most recently appeared in FX’s The Assassination of Gianni Versace: American Crime Story, as well as God Friended Me and the ABC television movie Three Rivers. She also starred in Masters of Sex as “Betty DiMello” and appeared in Law & Order: Special Victims Unit, Smash, Nurse Jackie and The Big C. On feature projects, Ashford appeared in Unicorn Store and Frozen as well as Top Five, Rachel Getting Married and Sex and the City. Ashford won the Tony Award, Drama Desk Award, and Outer Critics Circle Award for her portrayal of “Essie” in You Can’t Take It With You on Broadway. She has also appeared as Sylvia in Sylvia, Lauren in Kinky Boots, Glinda in Wicked, Jeannie in Hair, and Margot in Legally Blonde the Musical. Ashford also appeared in the acclaimed solo show Annaleigh Ashford: Lost in the Stars Live at 54 Below. Ashford is represented by Toni Howard, Dar Rollins, & Adam Schweitzer at ICM and Beth Rosner at Beth Rosner Management.

About FX
FX is the flagship general entertainment basic cable channel of FX Networks. Launched in June of 1994, FX is carried in 87 million homes. The diverse schedule features a growing roster of critically-acclaimed and award-winning hit dramas series including Taboo, Legion, Snowfall, Trust, Pose, Mayans M.C. and the upcoming Y; the critically-acclaimed limited series American Horror Story, Fargo, American Crime Story, FEUD, Fosse/Verdon and the upcoming Devs, Shogun, Mrs. America and A Teacher; acclaimed hit comedy series including Atlanta, Baskets, Better Things, What We Do in the Shadows and the upcoming Breeders; the half-hour series Mr Inbetween; the upcoming docuseries The Weekly with The New York Times; and the upcoming special A Christmas Carol. FX is the former home of the critically-acclaimed and award-winning hit drama series The Shield, Nip/Tuck, Rescue Me, Damages, Sons of Anarchy, Justified and The Americans. The network’s library of acquired box-office hit movies is unmatched by any ad-supported television network.

What do you think? Do you enjoy the American Crime Story TV Show? Have you watched either of the first two seasons? Will you watch season three?