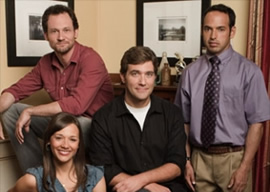 FOX is the last of the major networks to announce their 2008 – 2009 schedule. ABC, CBS and CW announced theirs earlier this week while NBC got a jump on everybody by holding their upfronts last month.

The series returning to FOX this fall are ‘Til Death, America’s Most Wanted, American Dad, Are You Smarter Than a 5th Grader, Bones, Cops, Don’t Forget the Lyrics!, Family Guy, House, King of the Hill, Kitchen Nightmares, The Moment of Truth, Prison Break, The Simpsons, and Terminator: The Sarah Connor Chronicles. Series returning mid-season are 24, American Idol and Hell’s Kitchen.

Like the other networks, FOX is introducing very few new TV shows for the upcoming season. FOX’s are a Jerry O’Connell sitcom called Do Not Disturb (formerly The Inn); action series Dollhouse from Joss Whedon (Firely); Fringe, a sci-fi series from J.J. Abrams (Lost); and a reality series called Secret Millionaire. Fringe and Disturb debut this fall while Dollhouse and Millionaire won’t be seen until mid-season.

With that out of the way, which FOX shows have been cancelled?

Back to You — Though the Kelsey Grammer – Patricia Heaton sitcom garnered better ratings than ‘Til Death, it was cancelled anyway. All 13 episodes have aired with the last one being shown last night.

Canterbury’s Law — The Julianna Margulies series was exiled to Friday nights after an unsuccessful tryout on Mondays. All six episodes have run with the finale having aired on April 18th.

K-Ville — The network maintained that the series was not cancelled after pulling it in December. Anthony Anderson found work on NBC’s Law & Order awhile back. Of the 11 episodes, one didn’t air and surely won’t.

Nashville — The reality show was dumped back in September. There was some talk of finding another outlet but it didn’t happen. All finished episodes have aired.

New Amsterdam — FOX seemed to have little faith in this series from the start. They cut the episode order to eight and the last one aired on April 14th.

The Next Great American Band — This one never caught on and limped to the series finale which aired on December 21, 2007. All 10 episodes have been shown.

The Return of Jezebel James — This was pulled from the schedule some time ago. Only three of the seven episodes have aired. Don’t expect to see the rest on FOX but they are available on

Unhitched — The Craig Bierko sitcom ran its course and won’t be back. All six episodes aired with the last one being seen on March 30th. Stay tuned!

MY WIFE AND I WATCHED K-VILLE
WE THOUGHT IT WAS ONE OF THE BEST SHOWS ON AT THAT TIME ALSO
IT WAS A ROUTINE EVERY WEEK K-VILLE, LOST, DAMAGES, BONES, HELLS KITCHEN, KITCHEN NIGHTMARES, HOUSE ALL THE BEST SHOWS ON TV EACH AND EVERY MONTH AND ALSO FEAR FACTOR WHAT IN THE WORLD HAPPEN TO FEAR FACTOR. PLEASE BRING BACK ALL THE GOOD PROGRAMS
THANKS FROM TWO DEDICATED TV WATCHERS

K-Ville was a very interesting show and we don’t need anymore dang reality shows. I usually have a great eye for a show that will make it and was sadly surprised that you dorks cancelled K-Ville. Oh well I don’t watch much T.V but I do watch Bones and I did watch K-Ville so I will have more time to read a book. Peace.

u guys r idiots u suck u guys have no intellegence for your shows hey paula was cancelled when M.C hammer got sewed

you need to uncancel new amsterdam, that show was getting really good, the guys who voted on the cancelation are morons!!

Next Great American Band should not be cancelled because of the producers errors in their choice of the night in the airing of the show. It should have had another night and they could have done a better job in some of the weekly promoting of it. Stinks that they killed it for alot of talented undiscovered bands out there! I hope one of the other networks picks it up!

I agree with Suzanne #6. I really liked October Rd & MIT. I am very disappointed with the way they have done these shows. I was glad to see MIT have a couple new shows. Let’s keep them both.

Back To You really was one of the best shows on. What a shame. Also VERY sad to hear Next Great American Band got cancelled. Why not try it on another weeknight besides Friday? There is so much worthless crap on TV and too bad they cut two very good shows.

HAS THIS NETWORK GONE MAD???…”BACK TO YOU” IS ONE OF THE FUNNIEST SHOWS ON TV…I DON’T WATCH MUCH TV..BUT THIS SHOW I SAW EVERY TIME IT WAS ON..ALONG WITH “TWO AND HALF MEN”..

I am so sick of all the juggling of shows on these networks. They never let any show stay long enough and they keep introducing new shows so nothing ever has a chance to make it. Shows like October Road, Woman’s Murder Club, and Men in Trees get cancelled and like someone else said, reality shows get to stay. The Bachelor is a joke. None of those couples have ended up together except for the Bachelorette. I just start to get into a show and it is cancelled. I am dizzy over the smorgesboard of shows every season. Why can’t… Read more »

i can’t belive it..!! k-ville was a good show and it was a great combination with prison break i’m upset…don’t get me wrong i love terminator but i loved k-ville the most.

Back to You was one of the funniest shows this year!! I find it incredibly sad that a show that seems to be doing well isn’t given a chance and we keep reality junk galore exploiting our kids minds with what isn’t “true reality”. Seriously how many people do you know have $100,000 sweet 16 parties or drive Hummers and BMW’s to school ~ I would dare to venture that for the majority of the American public that is not “reality”!!!! Back to you was a great show that could be watched with your family and not have to listen… Read more »

Bleh. Loved Next Great American Band, too. Very sad it was cancelled, but they seemed to have buried this release. They should have given it a better night.

DUDE!!! I completely agree. The level of talent on American Band dwarfed Idol and was MUCH more entertaining.

I don’t know if protesting will accomplish anything but I want FOX to know American Band was one of my favorite shows, how much I was looking forward to it, and how disappointed I am it is not coming back.

I can’t believe Next Great American Band is cancelled. That was the ONE Fox show I watched and TIVOed every week. As a musician, it was sooo much more interesting than Idol. Where do I go to protest?