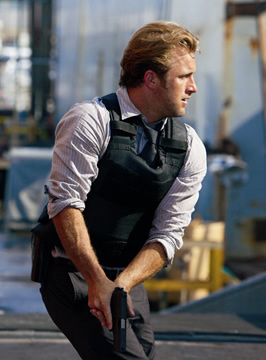 After its debut, it looked like the new Hawaii Five-0 was one of those rare animals — a revival of a classic TV show that didn’t crash and burn immediately. Still, the series isn’t turning out to be as big a success as CBS might like you to believe. The series started off very strong in the ratings but has been losing steam every week.

Hawaii Five-0 debuted on September 20th to a 3.9 rating in the 18-49 demographic (the number that the networks care about) and 14.2 million total viewers. In week two, those numbers dropped 8% but that really isn’t bad for a new show. In week three, they dropped another 3%. This past Monday, they dropped a whopping 11%, hitting a low of a 3.1 rating and 10.7 million viewers.

The CBS series still places first in its timeslot, most closely challenged by Castle. That ABC series registered a 2.7 and 10.66 million viewers this week, up 4% from last week. If Hawaii 5-0’s downward trend continues, it won’t be long before the show loses in the timeslot and could end up in danger by the end of the season. For now, it’ll almost certainly get an order for nine more episodes bringing it to a full season. Beyond that, we’ll have to wait and see.

Interestingly, last year’s timeslot holder, CSI: Miami was doing much better at this point in the season. After four episodes, it was averaging a 4.1 in the demo and 13.72 million while Hawaii Five-0 is currently averaging a 3.5 rating and 12.47 million. Perhaps CBS should have left Miami in its old timeslot.

What do you think? Will Hawaii Five-0 end up surviving past this season? Was it a mistake for CBS to boot CSI: Miami out of its established timeslot?

I love this show and would be disappointed if it was cancelled. get rid of reality shows and talk shows and stupid so called comedies. I enjoy CSI and NCIS and Hawaii 5-0 and pbs. So don’t get rid of another decent show to keep a horrible show.

I like the show. I can’t watch the old show, but the new show is great!

this is the best show on the air – the cast is the best – if this show is canc. I will never watch a CBS show again – and I will tell my friends and family not to watch it also. love this show

this is the best show on the air – this would be a terrible thing for CBS to can this show. stop putting on CRAP this is by far sooooooooooooooooooo good – Mcgarret and Danno the best -carol

Sorry folks , but its just too far lost for its support…just for the record, extra’s on their show had been rudely treated by production crew members, at least one time or another, secondly, they don’t realize the impact it causes, word of mouth spreads to others not connected to the show…third , they contributed to their own downfall…disrespect not only to the ” extras ” , but to the fallen veterans at Punchbowl Cemetery during a National memorial service. As stated by one production crew member to me ” you sucked “, and you and your crew walking on… Read more »

I enjoy 5 0 and CSI Miami…would like to see them both continued…..take reality shows off……

Well, season 2 has been disappointing. The premiere was great…but now they are introducing so many new characters that its getting away from the core group. They should nix Kona because she can’t act for **** and is way too frail looking to really kick some ass. But bringing in the “hot blonde” for Steve to drool over is a huge disappointment. The reason NCIS is so sucessful is the chemistry with the core group of characters. 5-0 is drifting away from that and will take a huge dive unless the correct it.

great acting but the writing is uneven in season 2. carguments are still great and leave me wondering how much is scripted and how nuch is adlib. the rest of the writing is uneven. “clues” to what’s going to happen next seem to stick out like a sore thumb. too many stories in one episode that don’t seem to overlap/fit together.

You guys are morons if you don’t bring back Hawaii five O.I mean really get off the reality show crap already!

I am a huge fan of Hawaii 50. I can’t wait to see next seasons shows.

This show is very well done! Please air the shows filmed that finish out the season this fall at least. Really like Hawaii 50 and CSI Miami also – don’t want to see either one of them go. And pleeeeese keep the reality shows to a minimum! They are getting very old!