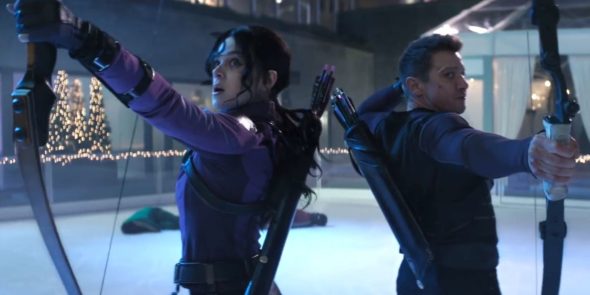 Hawkeye will arrive on Disney+ next month, and the streaming service has big plans for the next Marvel series’ arrival. Viewers will see a double episode premiere on November 24th for the Jeremy Renner action series.

Disney+ revealed more about the premiere in a press release.

“Disney+ unveiled plans today to launch the first two episodes of Marvel Studios’ Hawkeye when the highly anticipated six-episode event debuts exclusively on the streamer November 24. Subsequent episodes will launch each week on Wednesday. Check out a new 60-second spot that offers fans a glimpse of Clint Barton and fellow archer Kate Bishop in action.

Marvel Studios’ Hawkeye is an original new series set in post-blip New York City where former Avenger Clint Barton aka Hawkeye (Jeremy Renner) has a seemingly simple mission: get back to his family for Christmas. But when a threat from his past shows up, Hawkeye reluctantly teams up with Kate Bishop (Hailee Steinfeld), a 22-year-old skilled archer and his biggest fan, to unravel a criminal conspiracy. The series also features Vera Farmiga, Fra Fee, Tony Dalton, Zahn McClarnon, Brian d’Arcy James and newcomer Alaqua Cox as Maya Lopez. Helmed by Rhys Thomas and directing duo Bert and Bertie, Hawkeye debuts exclusively on Disney+ on Nov. 24, 2021.”

Check out the preview for Hawkeye below.

What do you think? Are you excited to see Hawkeye on Disney+ next month?

Looking very forward to this. Love the character, love the actor and thus far, the various series have been, largely, very good.