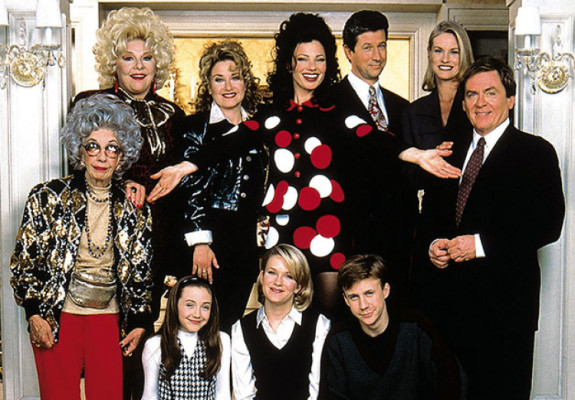 Are you a fan of classic comedies? Recently, COZI TV announced they are airing an eight-hour marathon of Here’s Lucy and The Nanny this Sunday, August 5th.

The “Lucy Nanny” marathon celebrates the grand opening of The National Comedy Center in Lucille Ball’s hometown of Jamestown, New York. The I Love Lucy star produced and starred in Here’s Lucy on CBS from 1968 to 1974.

NEW YORK, NY – (July 20, 2018) – COZI TV is celebrating the legends of comedy with a special eight hour, sixteen episode “Lucy Nanny” marathon on Sunday, August 5 between 1 PM and 9 PM (check local listings). This will include eight of the most memorable episodes of Here’s Lucy, followed by eight of the Lucy-est episodes of The Nanny, where Fran Drescher’s inspiration – Lucille Ball – shines through.

The programming event also celebrates the grand opening of New York State’s newest landmark, The National Comedy Center, located in Lucille Ball’s hometown of Jamestown, New York. The opening events for the new museum of comedy will run from August 1 to August 5 and include performances by Drescher, along with Amy Schumer, Lily Tomlin and many original cast members of NBC’s Saturday Night Live.

Drescher drew inspiration from the work of Ball and her role in Here’s Lucy while working on The Nanny. Admired by fans everywhere, these two comedic queens are joining forces for a very special night on COZI TV.

“Lucille Ball and Fran Drescher are two of television’s most admired actresses, and Here’s Lucyand The Nanny are two of television’s most beloved sitcoms. On August 5, COZI TV will bring these iconic names together. We look forward to delivering a memorable, fun-filled day of laughs for our loyal viewers from coast to coast,” said Meredith McGinn, Senior Vice President, COZI TV and LX.TV Productions.

Here’s Lucy features Ball in her third sitcom, and hilarity ensues as she takes the role of a California widow and single mother, Lucy Carter, who works as a secretary for her high-strung brother-in-law, and raises two eccentric children. The marathon will feature fan-favorite episodes of Here’s Lucy such as Lucy and Johnny Carson, where Lucy Carter sneaks her family into a live taping of The Tonight Show hosted by Johnny Carson, only to win an audience contest, and with it, a free dinner at the same restaurant as Carson himself.

In The Nanny, Fran Fine, played by Drescher, has her life turned upside down when she is dumped by her boyfriend and fired from her job as a cosmetic saleswoman, and enters the lives of a wealthy English widower and his three children as their nanny. The marathon will feature hit episodes of The Nanny like The Whine Cellar, an unforgettable episode where Fran finds herself trapped in a wine cellar while the rest of the family celebrates Fran’s mother’s 50th birthday upstairs.

The marathon will also include two guest-starring appearances by Elizabeth Taylor: both her famous appearance alongside Richard Burton in Here’s Lucy, as well as in The Nanny.

What do you think? Are you a fan of Lucille Ball and The Nanny? Will you watch the COZI TV marathon?