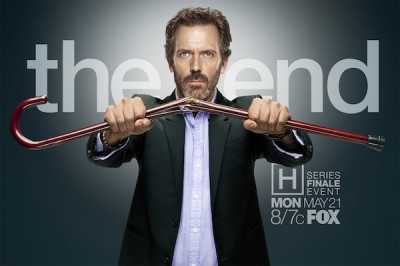 Well, Gregory House went out with a bang. Sort of. Tonight, FOX aired the series finale of their medical series, House. Titled “Everybody Dies,” the finale was directed by series creator and executive producer David Shore.

The ratings have been in decline for awhile so it was decided that, after eight seasons and 177 episodes, it was time to say goodbye to the curmudgeonly genius physician.

Many suspected that House would die in the final episode and they were right, mostly. Last week, Wilson and House were making plans to spend Wilson’s last five months on Earth together. Those plans were scuttled by the discovery of the hockey tickets that House stole. It seems his parole has been revoked and the grumpy doc will be spending the next six months in jail instead.

House is so despondent over the situation that he’s committing suicide in a burning building. While there, he’s “visited” by several characters from the show’s past — courtesy of several special actor cameos. In their own ways, they tell him that his life is worth living and he ultimately agrees. As he tries to leave, the floor collapses and he dies.

At his funeral, a distraught Wilson starts to deliver a thoughtful eulogy but can’t contain his ranting, calling his fallen friend a selfish jerk. He’s interrupted by a cellphone noise that turns out to be coming from his own pocket — and a cellphone that wasn’t his own. The text message tells him to shut up.

We next see Wilson incredulously meeting a very-alive House, simply sitting on some city steps. House has faked his death and left a corpse in his place (after switching dental records). Wilson tells him that he’s throwing away everything by doing this but the good doctor thinks it’s worth it to spend the next five months with his best friend.

We see the rest of the characters happily going about their lives. Chase has become the head of the department. Foreman finds House’s hospital badge slipped under his end table, realizes what it means, and smiles. House and Wilson, riding motorcycles depart on the open road, into the sunset, together.

What do you think? Was this a fitting end to House? Are you glad that House didn’t die? Did they miss anything? Was Cuddy’s absence a big deal?

Here’s a more complete synopsis of the last episode of House.

Like others, wondering what will become of House after Wilson had died. You know, ’cause they’re real people. 😉

So Cameron apparently remarried and had a child?

Perhaps Wilson had died at the inferno , watching House die , and the two ghosts rode off into the sunset . That would explain the cellphone , knowing where to meet House , and the lack of mentioning Wilson at the end of the show .

I watched it. Made me wonder why Lisa Edelstein’s (Cuddy) no-show at his “funeral”, and why she left the show rather suddenly. Was it due to creative differences, falling out with co-stars?? I had stopped watching the show months back due to lack of interest but will miss House and Wilson’s friendship. I hadn’t known that Wilson got cancer himself and had so little time left to live. Glad House became unselfish for once and spending what little time Wilson had left, with him instead of leaving him to die alone.

Welllll… I liked parts of it. I didn’t understand what started the fire, which kept me from understanding the whole motivation for what was going on. I *did* like that after 8 years of self-destruction, House realized that sometimes the best thing to do (rather than kill yourself) is just to start everything fresh. And I like that they started their ride on a bridge and House basically said that, as to Wilson’s cancer, “they would cross that bridge when they came to it.” So, it was largely okay if you can overlook how preposterous it was that he survived… Read more »

Characters drive a show & House had them in spades. Every departure was replaced with a winning & similarly flawed personality. The only downside to this series…in reality eveytime I meet a new Doctor…I wonder what kind of nutjob personality lies beneath the surface.

Yes, Cuddy’s absence left a big hole in the story. She and Wilson were the three main characters and while they brought back others in cameo performances, it was really a shame that Cuddy was not there. It pretty much ruined it for me, as well as imagining anyone in a burning building that long….dumb! I liked that he faked his death in order to spend the last months of Wilson’s life traveling together, ala “Bucket List”. But I have rarely been satisfied with any last episode of any series. One of the better ones, I thought, was “China Beach”.

I wonder if Cuddy left the show early and was left out of the final because she did a commercial for planned parenthood…..after all it is Fox

Guilty of murder. Sorry. Loved every episode except the last one.

I too already miss HOUSE. I loved the show and Hugh Laurie is GREAT!!! I’m glad he and Wilson rode off into the sunset and didn’t die.

When House appeared to be dead, it felt right. When it turns out he wasn’t dead, I felt a little cheated and manipulated. Still … love House and will miss those blue eyes every week.

House M.D. was the finest show ever made! It is a sad day that the show’s producers including Hugh Laurie couldnt find a way to continue. I wont watch anything else because all the shows I watch are stupid boring dribble compared to House! I’m glad he didnt die, maybe they will bring House back someday after Laurie’s musical career fizzes out! We can only Hope! Everybody Lies!! Goodbye House,,,,Fin

They got some details wrong, he didn’t fall through the ceiling and die, it looked like something fell on him but he found an exit in the back of the building. Oh and it wasn’t Vicodin wrappers, it was some tickets Foreman had gotten him in a different episode.

Going to miss House it recently got our family together to watch together. Loved seeing past characters fitted into this final episode but I miss Cuddie! In a way, so does House! Aloha House thanks for the memories!

I have been watching House largely since the beginning and have looked forward to Monday nights for the past 8 years. It occurred to me last year that the writers largely had run out of things to say. I still liked the show of course, but something was missing. That feeling was even more magnified this year with Cuddy’s absence (something I didn’t think I’d ever say) and again, some lame scripts that produced clunker episodes. It’s strange. I will miss the show even though this has been the case. In a way, it began to look like real life… Read more »

All of the personas that visited him while he was debating ending his life were great. I did expect Cuddy to show up, and I think that hurt it a bit, but more than that, I was expecting Tritter to be one that visited him and told him to end it because he was a no good junkie, or some such.

All in all, a fitting end for a great show.

loved this final series. topped off a great 8 year.