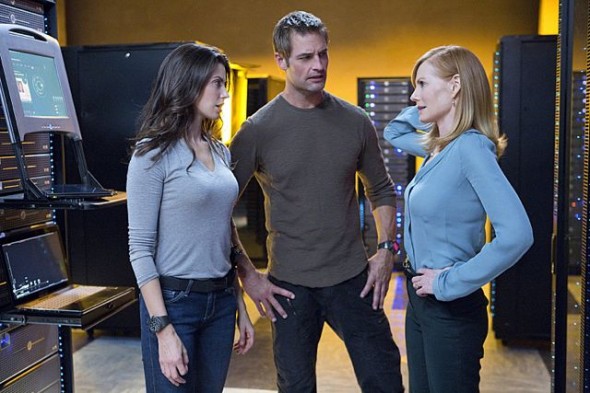 The networks shortsightedness on renewing new series’ is so predictable. They never
have the stamina to stick with a new show like “Intelligence” till it builds it’s audience. A really good, different show with a lot of potential gone before it’s time. While we still have to endure “2 & 1/2 Men” & idiotic “Mom”. What a waste.

I agree 100%…I don’t know how shows with such potential aren’t given a chance while junk shows and reality shows that aren’t given an ounce of thought are shoved down our throats consistently. ..I am so over watching premieres of new shows…I’d rather keep watching reruns of ST than get hooked on a new show to have it can celled without a second thoughts to its faithful fans!

We totally agree! Why did CBS cancel such an intelligent program?! We really enjoyed and are upset that CBS cancelled “Intelligence”

Seems like everything I love is getting the axe this year! This was a GREAT show and CBS needed to give it a second season. It got better as the weeks went on. I loved seeing Josh Holloway back on TV again and in a series that, IMO, was his best. I am quickly losing all respect for network television. They are so quick to drop the axe on a show despite how much the fans love it and how much they tell the networks they want their favorite shows to remain. They just don’t listen. And the sad thing… Read more »

I’m disappointed in this cancellation by CBS. Intelligence was one we always watched or recorded to watch later (with commercials). It seemed to have interesting stories and an excellent cast of actors. The cliff hanger final episode had an intriguing twist. I’m sorry we will never know what the writers had in mind for a 2nd season. FOX is just as bad in judging a try at a 2nd season, since they cancelled Almost Human – which again had good actors and writers with good stories, a sense of humor and good sci-fi aspects.

I agree! Or make it a summer show!

We agree! At least make it a summer program… and put it on a Tuesday – it’s original airing day!

I loved the show and was disappointed when it was cancelled…. Monday nights at 10:00 is not a good slot for an introductory series….

Bring back a smart show worth watching that was daster pace then all of Schwarzenegger’s movies.
To bad CBS likes two in a half men a womanizer show and others like it instead of classy shows with strong women actresses in lead roles.
Quit watching this network bad choices from this board.
To bad all there hanging their hats on is the CSI series and half a**ed comedy shows and a old mentlist show thats washed up.
Hope you make a movie Meghan Ory, Josh Holloway, of intelligence.

I said this show would be canceled after watching 15 minutes of the first episode. Everything about this show was bad writing , directing, stories. acting etc etc

Should not have canceled this series. This show has great potential.

Another STUPID decision they are really batting 1,000 , JACKASSES!!!

Thanks for helping me decide show I keep paying for TV service that I can’t help choose what to watch…….it’s bye bye cable TV. I refuse to pay for BS … Like choices made by CBS!!! Intellence was a excellent show you just had it in the wrong Time Slot !!! And you are to stubborn to do another season and a different time slop? But I bet you have another BS ops I mean CBS show that you will replace it with that won’t be as good. But that’s the way the networks crumble

I hate them so much! Why do the always cancel the good shows and keep the stupid. Intelligence deserves a Season two they never should have moved it to Monday night.

Really, really wanted a second season to prove itself. The reason for the fail is the time slot — how does one compete against Castle and Blacklist. Intelligence debuted on a Tuesday night with decent numbers, was then moved to Monday where, sadly, it had no chance of surviving.

I am upset that Intelligence was cancelled. This has been a rough 24 hours for me as I lost Believe, Revolution, and now Intelligence. 🙁

Join, us to Save The Tomorrow People at, #SaveTTP #The Tomorrow People. facebook.com/SaveTTP1 There is also a petition circulating here on twitter!!!! On Monday May 12,2014 at 9/10pmCentral we have plans on twitter to #trend and get TTP noticed!!!!! Thank You!!!!