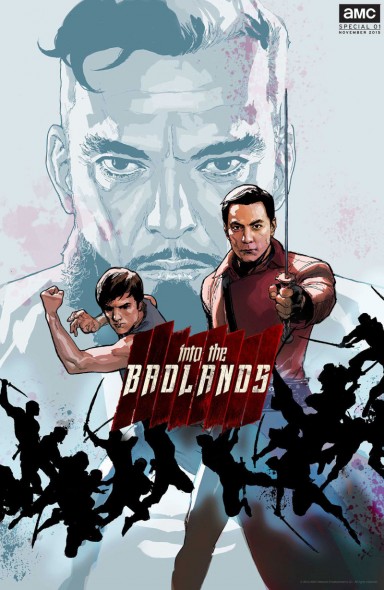 You can read the entire first series of the Into the Badlands comics, here.

In all, the first season of Into the Badlands averaged 1.79 in the demo, with an average audience of 3.86 million. We are tracking ratings for nine scripted AMC shows. Of those shows, Mad Men ended after its seventh season, and Hell on Wheels is ending after season five.

Into the Badlands star, Daniel Wu, has said he can see the show lasting for five or six seasons. In early December, Wu posted on Facebook that the show had been renewed for season two, but the post was later deleted.

Just before Christmas, EPs Al Gough and Miles Millar reported AMC has been happy with the show’s performance. They also teased what a second season of Into the Badlands might look like.

Any reading is good reading. Being about one of your favorite shows helps!! AWESOME!

Please renew I just got all of my friends to watch it. And now we are all hooked I’m getting everyone on my friends list on Facebook to watch too it’s that good! I rank it up there with game of thrones walking g dead and sons of anarchy in potential popularity! Definitely needs to be on Netflix Hulu asap

I very much enjoyed the 6 episodes of Into the Badlands and was looking forward to #7. Obviously I did not know there were only 6 episodes and strongly encourage AMC to continue with this sage of mystery and kung fu.

Renew it and put the first season on Netflix and Hulu to see what a great show it is. While it just stays on AMC with an old fashioned time slot it will never succeed. On demand TV isn’t the future, it is the present. As it stands there is no way to view Into the Badlands on demand and that needs to be fixed.

Could you please be more specific? Are you saying that it needs to be an UNRATED show to succeed? I have VERIZON and I can watch episodes if I want. I’ve seen them all at least twice each. Are you complaining because you can’t watch them because you don’t have cable? Whose fault is that? maybe AMC wants to hold onto them a bit.

I fully enjoyed all the episodes and the cliffhanger was great. Would love to see S2.

Renew ASAP!!!!
The show speaks for itself!

I love series and the book. I hope the both get a second season.