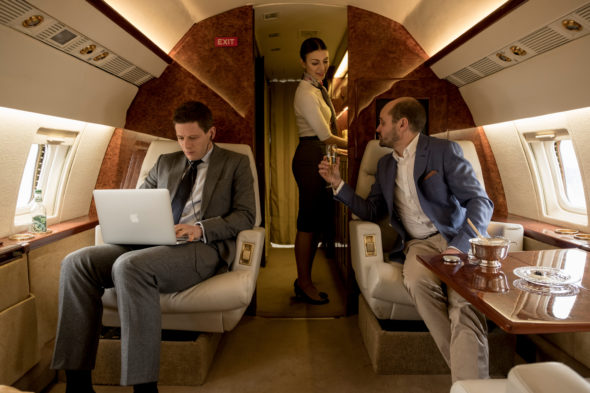 How’s life for Alex Godman and his connected family, during the first season of the McMafia TV show on AMC? As we all know, the Nielsen ratings typically play a big role in determining whether a TV show like McMafia is cancelled or renewed for season two. Unfortunately, most of us do not live in Nielsen households. Because many viewers feel frustration when their viewing habits and opinions aren’t considered, we’d like to offer you the chance to rate all of the McMafia season one episodes. **Status update below.

An AMC international crime thriller, McMafia stars James Norton, Juliet Rylance, David Strathairn, Faye Marsay, Aleksey Serebryakov, Mariya Shukshina, Oshri Cohen, Merab Ninidze, Kirill Pirogov, Yuval Scharf, Sofya Lebedeva, Clifford Samuel, Anna Levanova, and David Dencik. Inspired by Misha Glenny’s book, the drama centers on 33 year-old Alex Godman (Norton). Although he was educated in a British boarding school, this self-made hedge fund manager is the son of Russian exiles with connections to organized crime. When the family’s past returns to haunt them, Alex has to decide how far he will go to protect his loved ones.

What do you think? Which season one episodes of the McMafia TV series do you rate as wonderful, terrible, or somewhere between? Should AMC cancel or renew McMafia for a second season? Don’t forget to vote, and share your thoughts, below.

There definitely needs to be a season two, and three, and four. GREAT show!!! Please, AMC, pick up recurring series of McMafia. I look forward to each episode. A very compelling show!!!! Thank you.

No doubt in my mind there should be a season two! Great and exciting show! Please do not cancel we NEED season two!

We need shows like these, which break the mold of “another show like all other’s with different actors”. An intriguing storyline with excellent acting & directing, which pulls the viewer into the scene while embodying each emotion. The “story” has been happening in our real world and is very similar to someone born in August 1930, who came from very little yet started his own hedge fund in 1970 in Europe. There’s so much more that future Seasons could cover/expose … collapses of markets, bankrupt countries, control of high level politicians, mass movements of money & people, and the redefinition… Read more »

I think there definitely should be a second season.

An intriguing crime drama. The acting is very realistic. I hope the show is renewed for a 2nd season.

Another beauty from AMC. Please renew!

What an amazing show! I look forward to staying up late for this show!! What a refreshing change!! We are ALL left HUNGRY for more! Please bring a season 2,3,4,5 etc.. This cannot end here!! Pleaseee