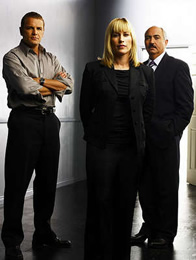 NBC has decided to cancel its long-running midseason staple, Medium, after five seasons on the air. Do you think Allison DuBois saw it coming?

The drama has been longtime midseason player for the peacock network, starting off in January 2005. Season one averaged almost 14 million viewers. Later seasons have attracted fewer people but the show has remained a good utility player for NBC. This season, the series built on the rapidly declining lead-in audience of Heroes.

But ultimately, the renewal decision came down to dollars and cents. NBC wanted financial cutbacks and a limited episode order. As a result, talks with the show’s studio, CBS TV Studios, stalled last week and NBC has passed on season six.

There is a strong possibility that Medium could move to CBS next season. The show’s already in syndication and the studio would reap big benefits by producing new episodes.

One possible scenario has Medium being placed on CBS’ Friday night schedule, sandwiched between compatible Ghost Whisperer and Numb3rs. What do you think of that schedule?

Why did they cancel Medium series? Was there not enough viewers?

I am disappointed with NBC’s decisson on Medium. If any of those mentioned, “Ghost whisperer” should have been cancelled, what a lame other body experience the husband has……………….The show lost all of its attraction for me at that phony point. Talk about an awkward plot………. For the one that wanted to know why Allison and Joe are in their thirties, at the end, it is a biblical thing, that we all would be the same age as Jesus when we arrive in heaven. Jesus died when he was 33 . Some network head haunchos are not too bright. Look at… Read more »

so nbc cant afford to do this show,,lets ALL HOPE CBS will pick up and continue this show.what a wonderful cast of actors and actresses that keep soo many viewers tuning in each and every episode.Ashow of this level of quality should run for 10,YES 10 YEARS,,5 years,even in a deep depression does not fly with this shows large and appreciative viewership,audience,fans,,we hear the chorus already,,bring them back,bring them back,bring them back….

Another show we liked cancelled. But, the stupid shows keep on going. I just can’t believe it.

I am so dissapointed. I also have my DVR set to record all new episodes fo Medium. Image my surprise when I started seeing Joe dead and clips of the future. I had no idea the show was being cancelled. I kept forwarding the show to get to the point where Alison would awake and it would all be a dream. This is so said. A little warning would have been nice. This was a great show and I am sorry to see it end. I’m sure it’s being replaced with a mediocre show that I will not watch. I… Read more »

To the person wondering why Allison’s spirit looked young when she died, in most ghost sightings, the person usually appears around in their 30’s…around the time that they looked the best and were healthy. But I also did not like the ending…Joe’s character seemed cold in comparison to what I think he would have been like if he had died…and in the end when they kissed, I thought it came off a little corny. And it hardly made up for the fact that she spent so many years alone. Despite all the stuff her daughters’ accomplished, you suspect she spent… Read more »

I was shocked to watch Medium today from our dvr recording to find that it was the SERIES finale! I couldn’t believe it! I am just sick about this! I had no idea it had been cancelled! It was one of the VERY best TV shows on “regular” network TV. And like Cheryl said, one that depicted a loving marriage and a happy family and home life. I am so sad that it has ended. Friday nights will not be the same. We never missed an episode. This has really hit me hard. I hope it gets a lot of… Read more »

I loved this show and looked forward to it all week. Totally disappointed. I hope to see these actors in a new show..

That was the worst finale I have ever seen! I have never missed a Medium since the show started. How many more loyal fans watched that show thinking it was a season finale only to find out it was a cruel ending. Having the family all grown upand scattered, Joe dying and then Allison dying too. It made me so depressed! I called my best friend after the show and told her I now needed antidepressants. Seriously, were the writers so upset they decided to ruin the show for ereryone! I will miss that delightful cast of characters. They added… Read more »

I agree..the finale of this show that I have watched ever since it began, was a total disappointment! It made me sad and depressed and I don’t think that was right since the true characters are alive and well and I assume, happy! They could have done a finale that left you feeling good ! I will miss this show alot. But what a note to finish on. I couldn’t imagine any of those kids putting their mother in a nursing home or Joe would have haunted them silly!!!! Bad bad finale!

I agree 100%, it is now Sunday night and I am still depressed! I am switching to only watching Premium television, at least Dexter’s wife’s death didn’t end the season!

Really, are you serious? No more Medium?!!! I can’t beleive it. At least they didn’t leave us hanging. My 2 favorite shows have been cancelled Medium and Ghost Whisperer. Every week I looked forward to the 2 shows.

Medium was so much better than the Ghost Whisper, Allison was more realistic than Melinda. I use to really like Ghost Whisper, but it got rediculous giving ghosts so much power, plus Melinda Gordon with her low cut dresses during winter time? That should have been cancelled because it outlived itself and not believable. Medium however, more people could relate to the characters and much more realistic and the acting was better, bring it back please.

And this was supposed to be a happy ending ? Joe dies in an airplane crash and Allison lives 48 lonely years without the love of her life then dies in a nursing home , alone ! Show should not have been cancelled as one one of the few shows that dipicted a loving marriage ! Shame on you

Nooooo! Say it isn’t so! Just saw the series finale and was blindsided! I LOVE this show! Awesome television!!! I agree with others…..no more reality tv!

I just watched the show from my DVR having no idea it was the series finale. When I got to the point where Joe was really dead, I found myself wondering, where in the heck is this episode going, as it was so sad, and I wasn’t liking it. I got real concerned when they started showing all the family clips and shots of all the actors. So I look at the info., discover it was the series end, and find my way to the Internet wondering why. I don’t think CBS bothered to advertise it was the end. I’m… Read more »

I can’t believe they have cancelled Medium, it was my favorite on Fridays, it is such a “smart” show with great family values, good for the family. Please CBS take it on, continue any day/time, I will be watching for it.

CBS is the network that Medium has been on the past few yrs. CBS showed the Series Finale!