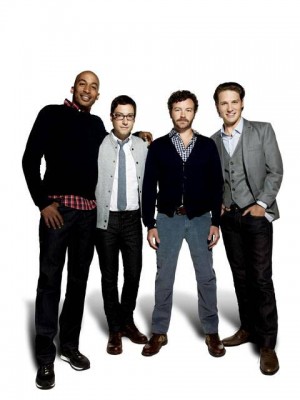 TV show description:
This buddy comedy follows the misadventures of four very different young men who work together at Full Steam Magazine. Together, the quartet serve as each other’s wingmen as they help each other navigate work, friendship, and women.

Milo (Danny Masterson) is an attractive and funny guy who has a little bit a Peter Pan complex. After his fed-up girlfriend dumps him, Milo is heartbroken and his friends become determined to help him get back in the game.

Gibbs (James Lesure) is a handsome ladies man who is an expert at seducing women. He’s a photographer for the magazine and loves working with his pals — and enjoys the ever-revolving door of beautiful models.

Tyler (Michael Cassidy) is the charming “pretty boy” of the group who brings a dose of style and sophistication with him. As a features writer, he frequently writes celebrity puff pieces for the magazine but would rather be writing material with more depth.

Neal (Adam Busch) is the nerdy one but, strangely enough, is the only one in the group with a steady girlfriend. His life is far from perfect however as his girlfriend Amy (Meredith Hagner) is sometimes looking for experiences outside his comfort zone.

Series Finale:
Episode #30 — “Odd Milo Out”
Tyler and Jude try to keep their new relationship a secret. Milo, already feeling left out since quitting Full Steam, has his traditional movie night taken away from him. Gibbs is hurt when Neal finds a new apartment. PJ tells a paranoid Myron to expect big changes in the office.
First aired: March 12, 2014.

What do you think? Do you like the Men at Work TV series? Do you think it should have been cancelled or renewed for a fourth season?

Why? Why on earth cancel this show? There are very few things in this world that can make me laugh until i have tears in my eyes, and this show is one of them. Not to mention, they lack of closure.

Men at Work should be brought back. These guys and their funny antics made my week. We use to grab the popcorn and laugh until our sides hurt. The finale of season one is my ALL TIME Favorite show. I still have it recorded and watch it often

I had my husband checking periodically to see when this started running again and I was crushed when he told me that it was cancelled. Along with Sullivan and Son, this is one the funniest shows that didn’t have someone’s stupid politics beating you over the head. The guys on the show were natural as opposed to the bad acting you see on a lot of shows. I guess I’ll have to watch my recorded re-runs over and over again. Booooo TBS!

Funniest show out there, I’m a 57 yr old afro-American, and I don’t like many of the new shows. I’m very very disappointed that the show was cancelled. Who’s rating these shows? Who do we need to talk with to bring this show back?

Yes, bring it back. Soooo funny.

Funniest show EVER! Please bring back!

What a great show Men at Work. Greag actors and really funny too!
bring it back!

Why do these networks cancel great shows just when u get hooked? Bring back Men at Work!

Just finding this out today. How the hell they going to cancel my top three favorite show. Smh. Done with tv. Bring it back!!!!! I’ve been waiting for the fourth season and finding out it’s canceled just hurts man…. At least let them end the series right answering all the questions and things they left up in the air.

its a great show mae me laugh aot bring it back.

As a married guy, I take pleasure in watching few of my shows. Men at work was my favorite show. What gives? Bring it back.

A good show – comedy entertainment, watching simply for entertainment. No blood, no guts, just fun. Sorry to see it go.

Noooooooo!!!!! So bummed it’s been cancelled!!!

TBS should have kept this series in the summer!!! Too much compition during the winter/spring run!!! Im pissed it got canceled!!!!