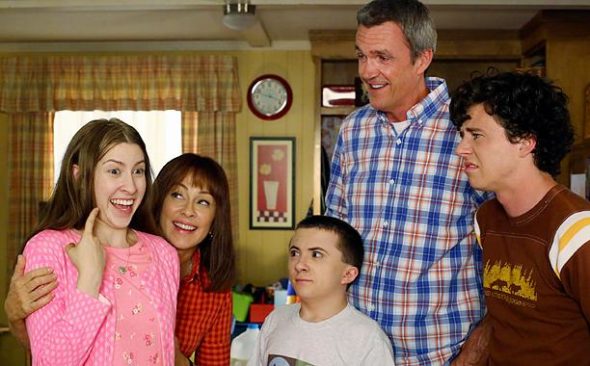 After eight seasons, there’s just as much drama in the Heck household. Has the The Middle TV show been cancelled or renewed for a ninth season on ABC? The television vulture is watching for the latest cancellation and renewal news, so this page is a dedicated place to track the status of season nine of The Middle. You can bookmark this page or subscribe for the latest updates. Remember, the television vulture is watching your shows. Are you?

The eighth season of The Middle  averaged a 1.48 rating in the 18-49 demographic with about 6.04 million viewers. Compared to season seven, that’s down by 22% in the demo and down by 18% in terms of total viewers. Compare The Middle’s performance against the other ABC TV shows.

The ratings have come down a little but The Middle continues to do well for ABC. This season, this sitcom helped the network cement their second night of comedy and that’s no easy feat.  The network had previously said they were negotiating for a ninth season, and now ABC has renewed The Middle for season nine. The Heck family will be back in the 2017-18 television season.
8/2 update: There will be no season 10 of The Middle. The upcoming ninth season will be the final installment. Details here.

What do you think? Are you glad the The Middle TV show has been renewed for a ninth season? How would you feel if ABC had cancelled The Middle, instead?

I really hate to see this show end. The Middle provides the most realistic programs compared to any other sitcoms. Let’s keep something positive going. .

This is very disappointing to hear. I have watched this show from the beginning and every episode is always funny. I guess because it is a show that doesn’t bring stories of sex, politics, just a regular family that everybody can relate to on a daily basis. Please think twice. You bring joy into our household