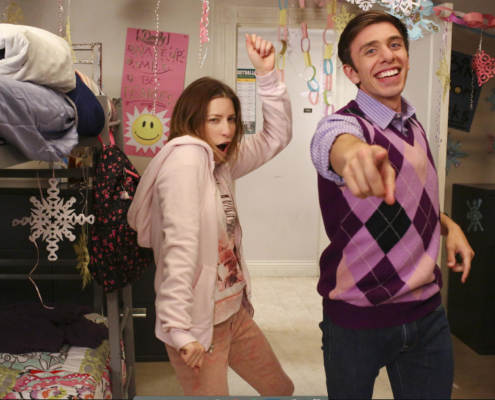 Big news for fans of The Middle! ABC has just announced the title and more details for their new spin-off TV show, THR reports.

The spin-off series (still in the pilot stage), titled Sue Sue in the City, will follow Sue Heck (Eden Sher) “as she leaves the small town of Orson to navigate the ups and downs of a career and young adulthood in the big city of Chicago.”

Joining Eden Sher in Sue Sue in the City is fellow The Middle star Brock Ciarelli, who plays Sue’s best friend, Brad Bottig. ABC has not released any further details at this time.

What do you think? Are you a fan of The Middle? Would you watch Sue Sue in the City?

I can’t wait! I’m excited to see this new show!

I hope it’s just as sweet and innocent as the Middle was. I won’t watch it if it turns into a Social Justice show like black-ish. That’s no fun to watch. I watch TV to get away from the world’s problems, not be lectured about them.

Loved the show and love Eden Sher but will Sue & Brad be enough ??? Not too heavy for theire shoulders ?
We’ll see…

I will definitely tune in

The Middle was a totally undervalued series. Can’t wait to see Sue Sue!!

Yes! Sue is an inspiration!

I related to Mrs Heck as s mom and loved all cast members.
Sue and best friend were great. I agree family guest appearances would be great.

Awesome! It would be nice if the rest of family made geust appearances.

We loved The Middle and we’re very disappointed when it was cancelled. Hopefully, Mom, Dad, Axel, & Brick will drop in to visit now and then. They were a fantastic cast. Great final episode.

After the Roseanne disaster, ABC probably regrets ending The Middle.

I was thinking she same thing. Read they might put the spinoff in Roseanne’s time slot.

Roseanne is still on Tuesdays at 8:00.