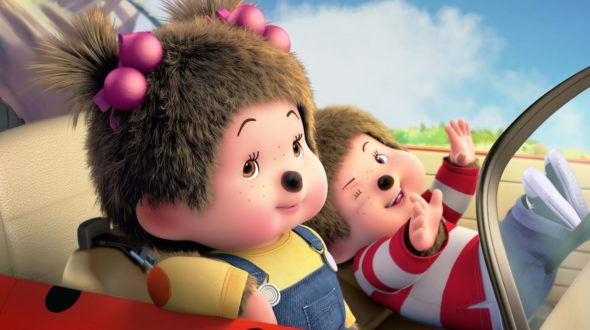 Do you remember Monchhichis? This week, Boomerang announced they’ve picked up a new reboot of the Hanna-Barbera TV show.

The CGI-animated revival centers on the monchhichis, “brave and equally cute friends whose mission in life is to act as sleep custodians, creating dreams for children around the world.” The original series ran on ABC for only one season in 1983.

Boomerang has not announced a premiere date for the new Monchhichi series, but you can re-live the original and read more info below:

The Beloved Plush from Sekiguchi Sets U.S. Premiere on the Premium Streaming Service

Monchhichi, the 2017 original CGI-animated series co-produced by Paris-based Technicolor Animation Productions and TF1 in collaboration with Sekiguchi based on the iconic lovable plush, will have its U.S. premiere on the Boomerang premium subscription streaming service. The deal was secured by PGS Entertainment, the global series distributor (excluding France).

Monchhichi are a community of brave and equally cute friends whose mission in life is to act as sleep custodians, creating dreams for children around the world. With guts and willpower, the Monchhichi always triumph in the end through creativity, teamwork, and of course, a little help from some good friends.

“We have had such an enthusiastic response from children around the world who have bonded with the big-hearted, sweet dream-creating, Monchhichi,” commented Sandrine Nguyen, Co-Managing Director, Technicolor Animation Productions. “Each adventure is a whirlwind comedy, filled with action, humor and tenderness and we are delighted that Boomerang premium service will now bring their magical adventures to kids across the U.S.”

Boomerang, a premium subscription service for families, kids and animation lovers, launched in April 2017 with a renowned animation library of titles from the Hanna-Barbera, MGM and Looney Tunes franchises alongside a growing original series offering. Today, users enjoy instant access to over 3,000 titles for streaming or download-to-go. The service also offers a full Spanish language experience and universal search.

The lovable plush, Monchhichi, were born on 26 January 1974 in Tokyo, providing comfort for young children and continues to serve as a nostalgic reminder for older age groups. Over 100 million dolls plus accessories have been sold in over 40 countries to date.

“Monchhichi is well loved by three generations of fans, and we are delighted that the cute, brave and smart characters in the CGI-animated Monchhichi TV series will now reach children across the U.S. on the Boomerang streaming service,” added Christophe Millet, EMEA Sales and Marketing Manager, Sekiguchi.

What do you think? Did you ever see the original Monchichi series? Do you think kids will watch the reboot?