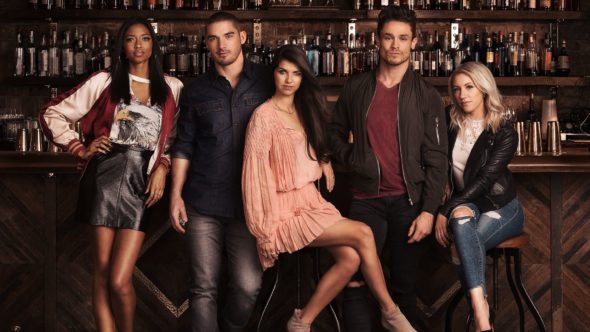 CMT is heading back to Nashville. This week, the network announced they’ve renewed Music City for a second season and ordered a new TV show called Racing Wives.

From the creator of The Hills, Music City “follows a group of young adults entering the next chapter of their lives while chasing dream of success, fame and romance in Nashville.” The series will return for a 10-episode second season in early 2019.

A stone’s throw away from the high-octane race tracks where legends rise and sometimes fall, the “Racing Wives” offers a rare glimpse inside the opulent eye-popping mansions and private planes that regally decorate the banks of Lake Norman, North Carolina. The cast features sisters-in-law Ashley and SamanthaBusch, married to Kurt and Kyle Busch who are each balancing family life with their own ambitions. Looking to take her rightful spot in the wives’ club is Whitney Ward Dillon, former cheerleader and now wife of Austin Dillon, who is torn between fitting in with her fellow wives while staying true to her best friend and cheerleader ride-or-die Mariel Lane. Also featured is Amber Balcaen, an aspiring NASCAR driver who is new to the racing community and left everything, including her boyfriend, back home in Canada to come to North Carolina to pursue her dream.

The series will be paired with “Music City,” which has been renewed for a ten-episode second season. The hit docuseries from “The Hills” creator Adam DiVello and Lionsgate follows a group of young adults entering the next chapter of their lives while chasing dream of success, fame and romance in Nashville. Season two will feature a shocking break-up, a wedding, a cutthroat Miss USA competition, unexpected friendships and new explosive rivalries. Returning are fledgling musician Kerry, and his wife, Rachyl, personal trainer Jackson, and his cousin, pageant queen Alexandra, as well as musicians Jessica and Alisa, who are at opposite ends of the spectrum when it comes to their love lives. New faces this season include Rachyl and Kerry’s old friend Jeremiah, Kerry’s new manager Tori, and Jackson’s childhood friend Stephen, who helps him navigate his relationships with girlfriend Baylee and Alexandra. Also entering the mix this season is Molly, Alexandra’s friend and instigator who voices a strong and loud opinion on everything and everyone she encounters.

What do you think? Have you seen Music City? Will you check out Racing Wives?