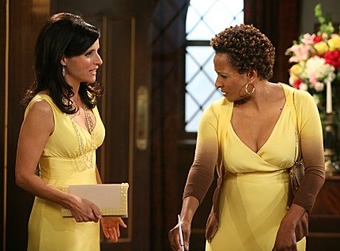 At the recent upfronts, it was announced that CBS was cancelling The New Adventures of Old Christine after five years on the air.

Starring Julia Louis-Dreyfus, the sitcom has been in danger of being cancelled each year and, on a few occasions, ABC expressed interest in taking it over. Though it’s looking doubtful that the alphabet network will indeed save it, discussions are still ongoing.

Kari Lizer, Old Chrisine’s creator, says that the cancellation didn’t surprise her, especially considering the fact that the show was taken out of the Monday night block of sitcoms and has been put on hiatus many times during its run.

She recently told TV Guide, “As far as what happened at CBS, we’ve suffered from a serious lack of support from them since the beginning… I hate to say it, but I’m afraid they don’t care much for the female-of-a-certain-age point of view over there. How else do you explain them squandering the talents of Julia [Louis-Dreyfus] and Wanda [Sykes]?”

The cancellation news came at a particularly bad time for Sykes. Her Saturday night talk series, The Wanda Sykes Show, was also cancelled by FOX. Lizer expects Sykes to bounce back though, noting, “She’s never funnier than when she’s pissed off.”

What do you think? Is CBS’ treatment of Old Christine some kind of sexism or just due to poor ratings?

I am a BRAND NEW WATCHER of this show. It is FAN FREAKING TASTIC!!! WHO IN THE WORLD DECIDED TO CANCEL THIS IS NUTS! I have hundreds of friends that would LOVE it! Please …………… BRING IT BACK 2014/15!!!!!!! PETITION! LOL Anything to see Julia and Wanda again!

I completely I love this how, I want to sign a petition to bring it back also.

Thank you Mariah. We all agree.. . PLEASE BRING BACK THE NEW ADVENTURES OF OLD CHRISTINE!!!! There’s no such thing as sexism in 2014….

the show was perfect and hilarious and fresh and brilliant, I can’t imagine anyone not loving it and the views in it are so in synch with society today. I’m sure the reasons for it being canceled are sexist or some sort of oppressive nature because like Lizer said, this brilliant show was knocked around and pushed and shoved into different time slots and lost its big lead ins and as soon as it starts getting an audience, it gets cancelled? Don’t tell me that doesn’t sound suspicious. I doubt Lizer can work at cbs anymore which is disappointing but… Read more »

They need to bring this show back! It was perfection!

I loved that show. I watch zll of the re runs. Everyone on there was perfect and Julia was funny as heck! I never cared much for Wanda Sykes until I saw her on that show and she played it well and she was funny as heck. Richard, son, brother new Christine, all of them.

Ireally liked this show, wanda sykes was awsome! And what about the ghost whisper?

What could u possibly dislike about ‘Old Christine ‘? The ex husband is awesome! The brother is fantastically hilarious! Julia rocks & is still great
Some pple must just miss the point??? Too damn bad! A few, like always, ruins
It for everyone!!!

I absolutely think ‘Old Christine ‘ is a wonderful show. Normally I can’t
Stand wanda sykes liberal rant, almost as bad as Robin williams! But, on this
show wanda is wonderful, along with the rest of the talented cast! Please
BRING BACK OLD CHRISTINE!

So glad to see this stinker go. One of the most contrived pieces of crap out there and so not funny in the slightest. Julia should have stopped with Seinfeld.

You have no sense of talent, zero sense of humor.

What, this is a great show! Everybody is just so politicaly correct these days that a series like this can’t make it! Really sad! I love this show so much, please bring it back!

Love this show! Ridiculous why it’s canceled! Bring it back!

What a great show ! Why the hell didn’t abc pick it up?

I’m watching it now. Seriously, I love this show. Its hilarious! I guess you need a good scence of humor to like it or get it. I would think there is more that want it on than don’t. That’s just my own opinion.

The show itself was misogynist as hell so I’m not sorry to see it go.

Seriously ??what the heck are you talking about lady?

networks have lost their minds oops they have no minds

I think the show was increditable written great acted perfectly. The show had the perfect mix of characters totally enjoyable and insightful. The writing was brillant,funny , and mind provoking.