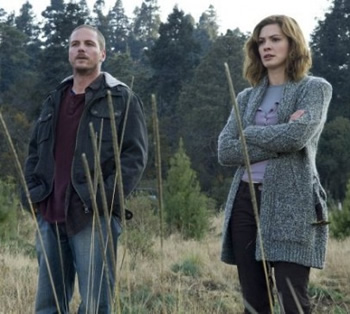 As expected, NBC has pulled their low-rated new series, Persons Unknown, from the Monday night line-up. Thankfully they haven’t yanked it off the air completely. They’re just moving it to the Saturday night graveyard.

The TV show has been performing very poorly so July 5th will be its last Monday night airing. Beginning July 17th, it will show up on NBC’s Saturday night schedule instead.

The Visa Gymnastics Championships will preempt the show on August 14th. Otherwise, it looks like Persons Unknown will run uninterrupted and conclude with episode 13 on September 4th. Producers have maintained that the final episode will properly wrap the series.

If by chance NBC pulls the low-rated show off the air before all of the episodes have aired, fans can take solace in the fact that they’re already scheduled to be released on DVD. Right now, the Persons Unknown: Season One

set is scheduled for an August 31st release. That date may change now that NBC has altered their primetime schedule.

NBC has promoted Persons Unknown as a mini-series and, since it’s gotten poor ratings, there’s virtually no chance that it will return to the peacock network for another round.

However, the series was initially produced for international buyers and the studios could decide to make another season, presumably with a new mystery and group of people. The decision to call the forthcoming DVD set “season one” and not “the complete series” seems to support that possibility.

What do you think? Will you keep watching Persons Unknown or wait for the DVD release? Would you be interested in a second season?

Okay, I want this show back.. this show meant a lot to me and I was almost in tears when I found out that Charlie and Bill didn’t go gay for each other, Ericka/Teresa didn’t die, Moira and Graham didn’t have kids, and Joe and Janet didn’t marry each other. I seriously want this show back. Joe was my hubby! D;> In my mind at least.. I want it back.. I might have hated the ending, but it did solve all the questions running in my head. They just didn’t soak in as much of the information as I did.… Read more »

I THINK THEY SHOULD DEFINITELY MAKE ANOTHER SEASON OF PERSONS UNKNOWN OR AT LEAST MAKE A NETFLIX EXCLUSIVE!! I MEAN I HADN’T HEARD OF IT UNTIL NETFLIX AND MY HUSBAND AND I WATCHED IT THE WHOLE SEASON AND LOVED IT!! WE WERE UPSET TO DISCOVER THERE WAS NO MORE TO IT.

I had not heard ofPersons Unknown until I stumbled upon it on Netflix. I just finished watching this on Netflix. I loved it!! I had to come online to see if it was still being aired. Bummer. I really liked this one.

It would have potential to be the next Lost if people paid attention. I don’t think it even got enough advertising, which is one of the reasons ratings were low. I too just finished it on Netflix. And I have to say that, no, NBC you did not wrap it up properly.