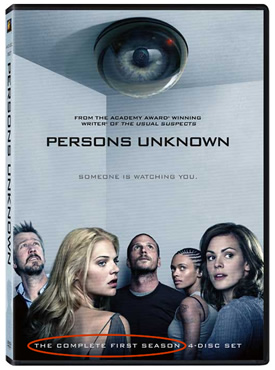 NBC has been promoting Persons Unknown as a mini-series and that the show’s mysteries will be answered by the end. The show has not performed well in the ratings so hopefully the network will let all 13 episodes air.

If they do pull the series early, the show is scheduled to be put out on DVD. According to Amazon, it’s scheduled for an August 31st release but that’s likely to change because NBC won’t have aired all of the episodes until early September.

Some readers have noticed that the DVD set is titled Persons Unknown: The Complete First Season

. Why? Because, though NBC has promoted it as a mini-series, Persons Unknown could continue for a second season.

Executive Producer Remi Aubuchon recently told Collider that, when they were shooting it, they did so believing it would be an on-going series. Though they wanted it to go on, he made sure that they answered all of the questions by the end of the first season, to make it a satisfying story for viewers.

Could there be another season? Aubuchon said, “It’s not unheard of, in the course of life, that if there’s enough interest in it, we could consider going a second season or doing another chapter. I keep looking at it as books in a series, and this season is the first book. I feel confident that we will have a beginning, middle and end, in this season, and it was wise of NBC to then call it what it really is, which is a mini-series.”

He continued, “24 is a really good example, in that there was a definitive beginning, middle and end for the first season. They had a slightly different format than we have, but the second season just retained Jack Bauer and a few other players, with the same basic format and idea, but it was a completely different show. I’m not saying that that’s exactly where we’re going, but certainly I think that there’s room for saying, ‘Hey, look, we told one story of a continuing saga.’ You should be able to pick this book up and get to the last line of the season and go, ‘Wow! Well, I hope there’s a second season, but at least I feel satisfied that I got to see all of this. They answered it all for me.”

Unfortunately, it looks unlikely that NBC would be interested in another season but that doesn’t mean it couldn’t return on another channel or in another form.

What do you think? Would you like to see Persons Unknown continue in some way?

I would like to see season 2 very much please!!!!!

My wife and I are very interested in seeing what happens in level 2.

I watched and loved Persons Unknown season 1. I am disgusted that like so many other series it was not allowed to move into season 2. I think it is sad that this, and many other, great shows are retired too soon and while the audience is left hanging…again! The idea for this series was brilliant. I have no idea why the story was not allowed to be completed. So now those who are intelligent enough to find, watch, be entertained, and understand this type of story, will never have the satisfaction of seeing it through to an acceptable end.… Read more »

Wish I had checked how many seasons there were of this show before I wasted all this time on season 1 . Ridiculous.

PLEASE make another season! Loved the 1st season and would recommend it if it continued.

Please make a season 2 I really loved the 1st season ….. I keep on checking Netflix for the possibility of a new season

Of course I would like to see the rest, it’s always aggravating when you complete season 1 and realize it was from years earlier and there is no season 2. In this case it leaves all of the “hostages” plus newbies standing in a hallway and the viewer clenching their teeth because they’ve wasted all those hours watching. Either do it or don’t start it at all.

Hells yea this show was crazy when I seen them at the ship at the end I was like yooooo but went to watch season two and seen there was none.they have to make one i want to watch It.very very good a nail biter.good work producers and actors and writires

Because of this I don’t like to watch series. I thought it was very good.

Wish you guys would bring the show back. Now I’m kind of upset.

Please bring this show back for a second season, I love it, & I’m so looking forward to see what happens next.