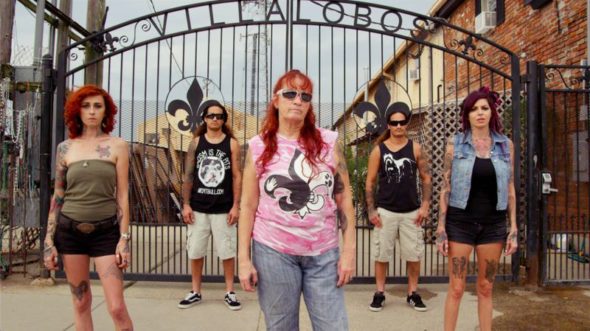 Pit Bulls & Parolees is returning for an18th season, but after 17 seasons on Animal Planet, the reality series is moving to Discovery Channel. The show about the largest Pit Bull rescue in the country will also air on Discovery+.

Discovery Channel revealed more about the renewal and the move of Pit Bulls & Parolees in a press release.

“Tia Torres is the heart of Villalobos Rescue Center, the largest Pit Bull rescue center in the U.S. For over 30 years, she and her family have gone above and beyond to give a second chance at life to pit bulls – dogs who have continually been demonized due to the reputation of their breed- and parolees. Now, in an all-new season of PIT BULLS & PAROLEES, new audiences and dedicated fans will be able to witness even more incredible stories of redemption and rescue with Tia and her Villalobos family in their never-ending battle to save man and man’s best friend. The new season of PIT BULLS & PAROLEES streams on discovery+ the definitive non-fiction, real-life subscription streaming service, and premieres on Discovery Channel Saturday, Apr. 3 at 8PM ET/ PT.

In the season’s premiere, the Villalobos Rescue Center crew is on a mission to catch a runaway dog, while daughter Mariah gets a creative idea for the parolees to design fundraising apparel. We’ll also see a family come all the way from sunny California in search of a new furry family member to share in their adventurous lifestyle.

Later this season, audiences will also meet other loving adoptees who travel from far and wide to give these dogs forever homes. We’ll see Tia as she visits a Mississippi shelter to give a hybrid wolf dog a second chance at life; daughter-in-law Lizzy as she leans on Tia for support in trying to find a work-life balance as a new mother of two; veteran tenant Lil Rocky as he faces a cancer scare and gets support from the Villalobos crew; and a pair of hearing-impaired dogs, Ben and Spike, who get the care they deserve. Audiences will also witness Tia as she gears up to revamp the Claiborne Warehouse when a hurricane heads straight for New Orleans.”

What do you think? Are you a fan of the Pit Bulls & Parolees TV series? Will you watch the new season on Discovery Channel?

This show is the Reason I watch t-v, so, yes, I would follow it any place.

For gosh sakes people READ. IF YOU HAVE ANIMAL PLANET ON YOUR TV YOU CAN CONTINUE WATCHING PITBULL AND PAROLEE.

I love pitbulls and parolees but I am not paying for Discovery +.

Hope this series continues on for many years to come, such a heartwarming and sometimes heartbreaking program to watch, but what an amazing group of people they all are, respect to all xx

Love this show and I will follow it wherever I can watch. I have Discovery + and I really enjoy it!

This is an amazing show about amazing people and dogs. My dogs and I try never to miss it.

I HATE that Pit Bulls & Parolees is no longer on Animal Planet! I have been watching this show for as long as it’s been airing- it’s my all-time favorite! I just don’t understand why AP didn’t renew the contract? There is nothing else on this channel that’s worth watching anymore. Bad decision Animal Planet – bad decision.

I will watch it on Discovery Channel. Chances are if you have Animal Planet you have Discovery. It’s part of your cable package. Stop freaking out about Discovery+ people. Look at your cable listings, Discovery is there.

Putting the show on a different channel is so ridiculous, times are hard enough but now we are suppose to spend additional money for the Disney + channel? I looked on the 3 Disney channels I get on my Dish Satellite package and none of them are showing Pitbulls and Parolees. Too bad, this is one of my favorite shows, but guess I won’t be watching it anymore.

I agree, I can not pay anymore for cable. this is a great show

I will not buy into Discovery+ and have been a fan of Pitbulls and Parolees since the beginning. I feel betrayed. This is so wrong at this time when people are out of work. Guess money talks.

I love this show so much and I own a pitbull because of this show and he is the dog I have loved most in my whole life! He is gentle and loves children and is dog friendly and I am obsessed with him! I am so disappointed animal planet has dropped them! It’s the only reason I watch animal planet! HUGE loss

too bad for the loyal viewers get treated like this. It seems this show is only concerned about them selves. Well they do not have to worry about this fan anymore I’m done.

I believe it’s the network’s choice, not the people on the show.

i think this sucks that the show is no longer with animal planet. I am a senior i do not know how to stream.