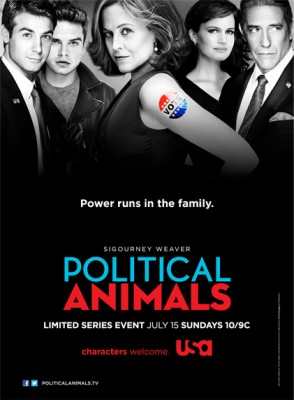 This was a great series, beautifully written, great cast and superb acting. Just too good for the average American audience who are stuck on reality shows. Let’s hope that Netflix or some other independent film maker will pick it up and carry on with it. Too good to lose.

This show is top shelf. Netflix should look at bringing this one back under their Original Programming label. Definitely West Wing caliber.

I just started watched the first few episodes last night on Netflix, and I am hooked! I haven’t watched anything as good as this series since West Wing, which I really miss! I am very sorry this new series got cancelled! There was a great story line, interesting dialogue, and excellent acting!

Political Animals was an excellent series. I ran across it via Netflix. Soooo disappointed to find there was no season 2. The quality was suburb. Bring it back PLEASE!!!

I bought the DVD of the complete series. I did not tune in when it was on TV perhaps because it was not promoted well and relied solely on its merit (unlike some really bad flops that seem to rely more on promotion than merit). The character development was dramatic and suspenseful, the possibilities of where things would go are endless and not unidirectional. In other words, I am truly saddened by its cancelation. Maybe it should be considered for direct to DVD production so as not to compete with the stupid “reality” shows out there. Give us intellectuals something… Read more »

I totally agree with Johann L

I’m extremely sad by the news of no 2nd season. This was a wonderful show. Why not put on net flix streaming. House of cards is doing so well. Or maybe sell to direct or dish TV. I have been a fan of usa for some time but this is a poor decision they made.

Am really disappointed that they wont have a series 2 of political animals, it was a great show

What a great show. It’s such a shame there will be no second season. GRRRRRRRRR. All the best shows get cancelled and stupid reality shows reign.

Immensely disappointed to find there will be no season 2 of this smart and entertaining political drama. Not since The West Wing have there been such thought driven story lines played out at 160o Pennsylvania Ave.
Carla Gugino and Sigourney Weaver were genius together!
Thanks for the taste of taste.

With all the “reality” shows that are on the air, I am disappointed that a good show like Political Animals is cancelled. It had a great story line. 🙁

This is disappointing news that Political animals got cancelled. It was great show and the cast was wonderful. I was really looking forward to a new season. USA tends to that. Should have given it a 2nd chance! It had buzz.

Every time there is a really good series they always take it off. This was soo different from the rest of the crap that is on tv. Really tired of all the reality shows, people go outside and live life. This was a show that tapped into the political life of people. May not have been all true,but came really close. Very disappointed that this will not be returning.