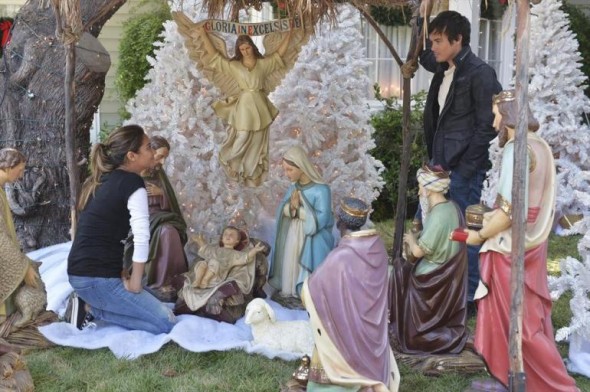 Lucy Hale, one of the stars of ABC Family’s Pretty Little Liars, recently fessed up about the future of the cable drama. The actress says that, while there are rumors that there might be a movie, season seven will definitely be the end of the TV show.

There’s still a lot more to come however. A holiday episode is slated for December 9th with more fifth season episodes to follow next year. Then, Pretty Little Liars has already been renewed for a sixth and seventh season.

Fans won’t have to wait until the last season to learn the identity of the mysterious ‘A.’

Recently, series creator Marlene King said that, “I think fans got a little worried when they found out that we were going seven seasons, because they thought maybe they’re going to have to wait that long to find out who ‘A’ is, but I am promising you that you don’t.”

The final season is confirmed by Hale at 00:48 in the video below.

What do you think? Is seven seasons long enough for Pretty Little Liars? Should it run longer or is seven too much?

Hi everyone, I am very sad to hear that PLL will most likely end after season 7, but it’s July 2015 and even if it does end after season 7 it won’t end till sometime in 2017, so even if it does end we don’t need to tear up yet. Also it’s still unofficial, we won’t know for sure until ABC Family states the series fate. Except a 8th season still could happen since if you look at the channels other shows PLL is definitely the most popular at the same time.

Supernatural is an awesome show! Now as for 90210 eh they could have cancelled it after the first season for all I care. Now don’t get me wrong I LOVE pretty little liars, but the show didn’t do the books justice! & I honestly think how they revealed “A” was kinda of a letdown. Just my opinion though.

I believe that this show should not come to an end at season 7. There can be more secrets revealed and maybe one of the main characters can die.

I don’t think they will kill off the main characters.

Hi girls my name is Brenda I am very big fan of you, I love you ,because you did not come for the brazil one day, all I wanted to talk with you one day take many pictures exit seals show some places for you would be very good if vcs want to come leave your whats to keep in telephone contact with me kisses I am pure here I love you very kisses spoke Portuguese and English..

I don’t want the show to end

I think they should continue the show as long as possible. I think it would b neat if they all got married and had daughters of their own tht grow up together too like they did.

I am in love with this show. Don’t want it to end after 7. don’t care what the haters say about it being prolonged

We have to remember that there are a good 60+ episodes left.. we are not even in 2015 yet and the show if as promised will be 7 seasons.. then it will air until atleast mid 2017….. its 2,5 more years…… I think that the show will feel completed when the last episode airs.. the actresses are also getting older… they can not pretend to be teens forever…. and also the A storyline is getting a bit tiresome in my opinion now by mid season 5… I think that season5 so far is better than season 4 however….. BUT.. a… Read more »

in all of the seasons in PLL there is still more stories story to tell so far we only got half of the Bethany young story but there is still more to the Bethany story that we still don’t know and we keep on forgetting about the Sarah Harvey story and she’s also involved and there is a connection between Sara and A? When Allison dissapeared out of nowhere in the first season allison disappearance was linked to Sarah Harvey investigation because she went missing and was never found but the Rosewood police only found her bike but not her… Read more »

You do realize they are only halfway through their fifth season, right? You also realize they have about 25 episodes each season, yes? There are about 65 episodes left to air. If you are unsatisfied after the series finale (likely to air in 2017), then you can start boycotting ABC Family. But to get so worked up when they have 2 and half seasons left to finish the story… that’s a bit extreme.