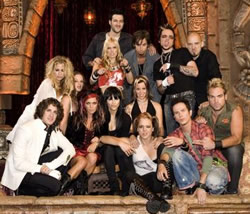 Series Finale:
Episode 64
Lukas Rossi won the competition and became the frontman for Supernova. Magni Asgeirsson came in fourth, Toby Rand was third, and Dilana Robichaux was the second season’s runner-up. Gilby Clarke offered to write and produce Robichaux’s album and Dave Navarro offered to play on it.
First aired: September 13, 2006.
What happened next?
There’s been no news of any plans to revive the series.