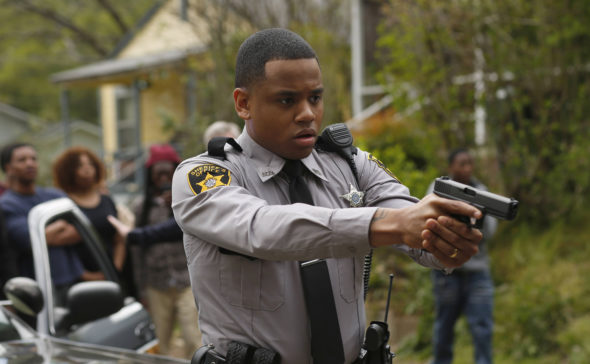 When African-American Deputy Joshua Beck (Mack Wilds) shoots and kills an unarmed white college student, it unsettles his small town. Before the community comes to terms with the disturbing incident, the media shines a spotlight on the overlooked murder of an African-American teenager.

As tensions rise, the Department of Justice launches an official inquiry and assigns experienced investigator Ashe Akino (Sanaa Lathan) and young Special Prosecutor Preston Terry (Stephan James) to the case. While investigating, they find indications that there may have been a cover-up, involving prominent people.

Governor Patricia Eamons (Helen Hunt) is in a tough race for re-election, and the shootings are only exacerbating her campaign’s struggles.

Ashe and Preston must navigate the media scrutiny, as well as the public debate, and deal with the community discord which arises from such volatile cases.

Series Finale:
Episode #10 — Hour 10: Last Dance
The hearings for both cases are held and, as Preston presents the facts to the jurors, the truth behind each shooting is revealed. Meanwhile, Pastor Janae and other petitioners gather outside the courtroom in anticipation of the results, hoping for a better future. After the Sheriff’s Department loses one of its own, it becomes clear who is really to blame.
First aired: May 24, 2017.

What do you think? Do you like the Shots Fired TV show? Do you think it should have been renewed for a second season?

Please don’t cancel this shop it’s one of my favorites.

I really like the show. I love the storyline, it is relevant about what is happening in our society right now.

I love it, but I worry how long can they run the show once they solve the current case. Can’t wait to see what’s next.

This has become a favorite show!!!! Please renew this show. Love Sanaa Lathan and Stephan James.

I absolutely LOVE this show!! Can’t wait from Wednesday to Wednesday for the next episode!!

I love it.. keep it..please

Love it. Keep the series.

Love the show…Fresh and real views

it’s a great show ! it will be renewed for season 2 , Everyone will be watching .. Great job “Shots Fired” cast !