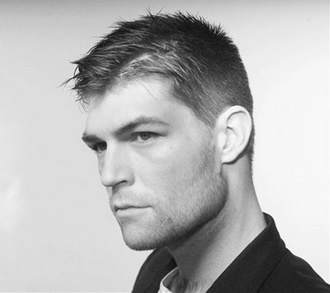 When it was revealed that Andy Whitfield had to drop out of the Spartacus series due to his battle with cancer, there was concern that the TV show would be cancelled. Starz had to make a difficult decision; wait and hope that Whitfield’s health would improve and allow him to return to the physically taxing role, cancel the series, or recast the role. Considering the show’s popularity, it’s not surprising that they opted for the latter. Spartacus will indeed continue with a new actor, Liam McIntyre, in the lead role.

Here’s a press release from Starz…

McIntyre takes over the role of the Thracian warrior sold into slavery in the Roman Republic city of Capua – where he rises to become the champion of the city – before leading the slave revolt that ended Season 1. The part was played in the first season of “Spartacus: Blood and Sand” by Andy Whitfield, who was forced to leave the show in order due to health issues. Whitfield gave his blessing to the recasting.

“Since no one can really replace Andy, we realized that we should instead find an actor who can truly lead ‘Spartacus’ forward,” Albrecht notes. “It was important to us to have Andy endorse the idea of recasting this part, which he did in the same heroic manner that he’s dealt with his whole ordeal. And that, coupled with our fortune in finding a young actor with the gladiator credentials and the acting ability of Liam, makes it easier for us to keep this hit franchise going.”

Liam McIntyre made his mark in his native Australia on such series as “Neighbours,” and “Rush.” He also appeared in the HBO mini-series “The Pacific.” He recently completed his first feature starring role in the independent film Frozen Moments. McIntyre is currently in New Zealand, getting himself into gladiator shape in order to take on that iconic role. Production on the series is slated to resume by Spring of 2011.

From the time “Spartacus: Blood and Sand” debuted on Starz in January, 2010, it established itself as an epic production with rich storytelling and visuals unlike anything seen previously on any TV show. Audiences responded immediately, making it the most-watched premiere in Starz’ history, and making the show the most watched cable program on nearly two-thirds of the Fridays it aired original episodes. Also starring John Hannah as Batiatus, Lucy Lawless as Lucretia, Peter Mensah as Doctore, Manu Bennett as Crixus and Viva Bianca as Ilythia, “Spartacus: Blood and Sand” was one of the most talked-about and best-loved TV shows of 2010. Season 2 of the series finds Spartacus and his fellow gladiators now out of Capua and engaged in the massive slave rebellion against Roman society that has echoed through time.

“Spartacus: Gods of the Arena,” a six-part prequel that tells the story of the House of Batiatus gladiator school, and the intricate personal, sexual and political maneuverings in Capua five years before “Blood and Sand” was set, debuts at 10 p.m. et/pt on Friday, Jan. 21. Dustin Clare, as the charismatic and self-destructive gladiator Gannicus, joins Hannah, Lawless, Mensah and Bennett in the event series.

What do you think? Will you watch the new Spartacus? Did they make the right decision?

Man Andy was awesome as Spartacus. I can only say good luck to the new actor. I saw the preview and I just have to say that already his voice does not carry the weight of the heroic leader like Andy’s did, but I will watch and I hope the action will make up for it.

It will take some getting used to seeing a “new” Spartacus, but the series is so well done
I will be watching Season 2 and any to follow –

no one can replace andy he WAS Spartacus but I think he would like to see the series go on it was great and he gave so much to it. he will live on forever threw his portrail I hope we will see the second season, Andy we miss you.

I will not watch it. i would rather have waited til Andy recovered. I have faith that he will its all about the money to the producers so they had to rush the production…. The guy replacing him is scrawny and looks like he couldnt lift a sword. Big time mistake by starz.

Andy, you are my guy, you should be the one finish up the whole, my prayer, By God grace you will get well to able to finish what you started. Amen. Grace be to a new Actor too.

I LOVE THEM BOTH, THEY BOTH SEXY, I HOPWE ANDY GET WELL ,I PRAY FOR HIM
SO HE CAN COME BACK BLESS BOTH OF YOU

BLESS BOTH OF THEM, I PRAY FOR ANDY TO GET WELL. AND COME BACK TO SPARTACUS. THEY BOTH ARE GOOD, THEY BOTH SEXY,I LOVE THEM BOTH

It will not be the same. Andy will be missed. The new guy is not bad in looks he has a similarity with Andy. I hope he can turn into the macho and sexy man Andy is.
I will watch the series because i like the story. I ask the lord for Andy’s recovery.

I watched Blood and Sand and was hooked (got behind in my classwork). When I heard about the prequel I had negative feelings towards it but after the first episode I was hooked again. Now to know that Andy will not be in the season 2 is sad news because he played the role superbly. To see someone else take his spot will take some getting used to. I do hope season 2 keeps me hooked as the prequel and season 1 done (still behind in my classwork). This is one of the best series out on TV. It’s 300… Read more »

Well I say, lets see what this new actor can bring to the table before we so quickly dismiss him. I’m a big Spartacus fan and I hate that Andy has to leave his post. I pray for his speedy recovery.

I do not think anyone can replace Andy. He does the role so well and I loved him. It would be really hard to see someone else as Spartacus. I think they should just make another character. Maybe a brother or cousin of Spartacus. I am praying for Andy we have been praying since we found out he was sick. Hes even on the prayer list at my church. I really hope he gets better.

Andy’s health comes first but it will not be the same no matter who takes his place. They should bring him back when he is well. I don’t know if we will watch the new guy. Season one had a perfect ending! Our prayers and thoughts to Andy and his family.

I’ll watch it, but it won’t be the same. I hope Andy gets well. My prayers & thoughts are w/ him & his family.